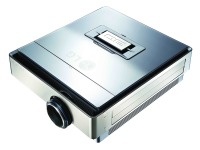 Planning to buy the mid-size sedan you've always dreamt about? Hold that thought, because LG has released a projector that may make you reconsider. At Rs 8 lakhs, the CF3D is a full-HD projector that brings cinema-quality 3D projection in to your living room. This puts the expensive CF3D into the rarefied territory of elite CRT projectors.

To compete with the best, the CF3D features a 0.6" LCoS (Liquid Crystal on Silicon) chip incorporating the best aspects of LCD projection and Texas Instruments' DLP (Digital Light Projection) technologies. This is touted to ensure richer blacks, better contrasts, and vibrant colours. The projector incorporates two such projection systems and routes the output through a single lens for a hassle- free 3D experience.

The CF3D is capable projecting full-HD images at a 120 Hz frame rate. Its lamp is rated at 2500 ANSI lumens, which despite being halved during 3D projection, should allow decent video fidelity despite moderate ambient lighting. Its in-built camera automatically adjusts brightness for an optimum balance between image quality and lamp life.

While users still have to wear 3D glasses, they are lightweight polarised ones unlike the bulky and disorienting LCD shutter glasses required by most 3D televisions. If you are rich \ crazy enough to consider buying this uber-expensive projector, make sure you buy a high-gain screen for the polarisation effect to work as intended.