Shares now halted at the market. The #3 computer maker may get more freedom to explore new avenues. 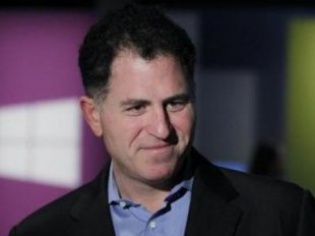 Company founder Michael Dell and Silver Lake are paying $13.65 per share in cash for the world's No. 3 computer maker.

The transaction is expected to close before the end of the second quarter of Dell's fiscal 2014.

News of the buyout talks first emerged on January 14, although they were reported to have started in the latter part of 2012. Michael Dell had previously acknowledged thinking about going private as far back as 2010.

The $13.65-per-share price is a premium of about 24 percent to the average of $11 price at which Dell stock traded before news of the deal talks broke and is far below the $17.61 that the shares were trading for a year ago.

Dell has steadily ceded market share in PCs to nimbler rivals such as Lenovo Group and is struggling to re-ignite growth. That is in spite of Michael Dell's efforts in the five years since he retook the helm of the company he founded in 1984, following a brief hiatus during which its fortunes waned.