"We're only just getting started, there's a lot yet to come," said CFO of the Windows unit. 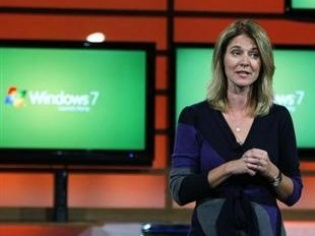 The new Windows 8 system is off to a "solid" start and should get a boost in sales over the next few months as new touch-screen devices hit the market and Microsoft Corp hones its retail strategy, according to a top executive.
The flagship product of the world's largest software company, launched on October 26, has not set the technology world on fire. By early January, it had sold more than 60 million units, on par with the release of Windows 7 three years before.
"We're only just getting started, there's a lot yet to come," said Tami Reller, chief financial officer of the Windows unit, in an interview at Microsoft's campus near Seattle.
"Touch laptops and convertibles, we're really just starting to see these and over the next couple of selling seasons we'll have them across all form factors and all price ranges."
Reller highlighted new tablets from Acer Inc and lightweight laptops from Hewlett-Packard Co as machines capable of grabbing a share in a mobile computing market dominated by Apple Inc's iPad and Google Inc's Android.
She thinks new devices will answer demand for Windows 8 that was thwarted over the Christmas period by the scarcity of the most popular machines, partly caused by constrained supply of touch-screen components.
"At holiday there were certain devices that were limited in their volume. We sold out of a lot of the most interesting things," said Reller.
NO SURFACE NUMBERS YET
Microsoft has still not revealed the number of Surface tablets it sold since the device's launch alongside Windows 8, but research firm IDC last week put it at 900,000. That is much lower than analysts' initial estimates and a fraction of Apple's almost 23 million iPad sales last quarter.
The second of two Surface devices launches this weekend, running on an Intel Corp chip and capable of running all legacy Windows programs, which might appeal more to businesses.
"You launch Excel and you can just see things fly," said Reller, who has been using a Surface Pro for the last two weeks.
A Forrester Research survey published on Monday showed that only 2 percent of "information workers" around the world are using Windows tablets for work, but 32 percent indicated they would like one for their next work tablet, which could translate into 200 million sales of Surface and other Windows tablets.
One selling point of the Surface Pro is a full suite of Office applications, which means Microsoft can market the tablet as a fully functional PC. Microsoft has not released Office for the iPad, although many expect it will eventually.
POST-SINOFSKY COLLABORATION
Reller, a 12-year veteran of Microsoft, runs the financial and marketing side of the Windows unit, while Julie Larson-Green runs the technical side.
Reller and Larson-Green took over the unit after the unexpected departure of Windows head Steven Sinofsky in November.
Microsoft hinted that Sinofsky's successors would stress integration and collaboration between business units, especially Windows and Office, which has been strained in the past.
"I am very happy with where our relationship is with the Office team," said Reller. "Both Julie and I have worked closely with the Office team. We worked closely together when Steven (Sinofsky) was here and even closer now."
Reller said collaboration was already happening under Sinofsky, citing the creation of Bing, Xbox and Office apps for Windows 8, and close co-operation with Microsoft's server and tools unit, which enables Windows 8's "cloud" services to operate.
"More has not changed than has changed," said Reller. "We probably had a day of getting ourselves oriented and maybe a few weeks to get fully oriented, but things are moving."
Announcing Sinofsky's departure in November, Microsoft Chief Executive Steve Ballmer wrote an internal memo stressing a new goal to "drive alignment across all Microsoft teams," suggesting co-operation had not always been a success in the past.
"Steve's reference was, 'Let's take that base (of collaboration) and just keep going," said Reller. "And that's happening."
IMPROVE RETAIL
Microsoft spent hundreds of millions of dollars promoting Windows 8 and Surface last quarter, but consumer interest at third-party stores such as Best Buy Co Inc tended to focus on Apple and Android products, according to a Reuters survey of shoppers in mid-December.
Some in the PC industry have complained privately that Microsoft has not done enough to train sales people or educate consumers on the new range of devices running Windows 8.
"I think we can do better and we'll work with them (retailers) to do better," said Reller. "That's not a criticism of our retailers. But we are definitely going to do more at retail to make that experience better."
Overall, Reller was happy with progress in the 90 days or so since Windows 8 launch.
"This is a solid start. But we are just getting started," she said. "We have a lot of reasons to be optimistic."
(Reporting By Bill Rigby. Editing by Andre Grenon)