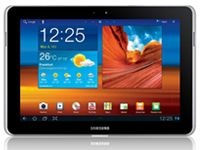 Back in September, Apple had won a lawsuit against Samsung over the violation of its patents. This resulted in a ban on the GALAXY Tab in Germany. In order to dodge this ban, Samsung has now come up with a slightly redesigned GALAXY Tab 10.1N.

The patent was mainly based on the use of edge-to-edge glass on the iPad. Hence, the Koreans added a frame outlining the screen. The speaker placement has also been changed, but apart from that you can't really make out the difference between the "original" and revamped design. Whether these changes will help the company to clear the patent hurdles remains to be seen. Either way, the manufacturer will definitely get some time to sell more tablets, before the court decides on this matter. For the Samsung fanboys who still think the company comes out with original designs, follow this link. Samsung fans in Germany can only hope that Apple hasn't patented its charger, box, and data cable.

Here's a comparison image of the GALAXY Tabs: