Apple iPhone is reportedly overseeing less preference among users in Asian cities such as Singapore, Hong Kong. The emergence of Android is also being attributed to this trend. 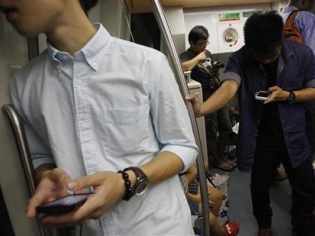 Apple Inc's iconic iPhone is losing some of its lustre among Asia's well-heeled consumers in Singapore and Hong Kong, a victim of changing mobile habits and its own runaway success.

Driven by a combination of iPhone fatigue, a desire to be different and a plethora of competing devices, users are turning to other brands, notably those from Samsung Electronics Co Ltd, eating into Apple's market share.

In Singapore, Apple's products were so dominant in 2010 that more devices here ran its iOS operating system per capita than anywhere else in the world.

But StatCounter, which measures traffic collected across a network of 3 million websites, calculates that Apple's share of mobile devices in Singapore - iPad and iPhone - declined sharply last year. From a peak of 72 percent in January 2012, its share fell to 50 percent this month, while Android devices now account for 43 percent of the market, up from 20 percent in the same month last year.

In Hong Kong, devices running Apple's iOS now account for about 30 percent of the total, down from about 45 percent a year ago. Android accounts for nearly two-thirds.

"Apple is still viewed as a prestigious brand, but there are just so many other cool smartphones out there now that the competition is just much stiffer," said Tom Clayton, chief executive of Singapore-based Bubble Motion, which develops a popular regional social media app called Bubbly.

"Singapore and Hong Kong tend to be, from an electronics perspective, leading indicators on what is going to be hot in Western Europe and North America, as well as what is going to take off in the region," said Jim Wagstaff, who runs a Singapore-based company called Jam Factory developing mobile apps for enterprises.

Southeast Asia is adopting smartphones fast - consumers spent 78 percent more on smartphones in the 12 months up to September 2012 than they did the year before, according to research company GfK.

IN WITH THE YOUNG CROWD

Anecdotal evidence of iPhone fatigue isn't hard to find: Where a year ago iPhones swamped other devices on the subways of Hong Kong and Singapore they are now outnumbered by Samsung and HTC Corp smartphones.

While this is partly explained by the proliferation of Android devices, from the cheap to the fancy, there are other signs that Apple has lost followers.

Singapore entrepreneur Aileen Sim, recently launched an app for splitting bills called BillPin, settling on an iOS version because that was the dominant platform in the three countries she was targeting - Singapore, India and the United States.

"But what surprised us was how strong the call for Android was when we launched our app," she said.

Indeed, 70 percent of their target users - 20-something college students and fresh graduates - said they were either already on Android or planned to switch over.

"Android is becoming really hard to ignore, around the region and in the U.S. for sure, but surprisingly even in Singapore," she said. "Even my younger early-20s cousins are mostly on Android now."

For some, it is a matter of wanting to stand out from the iPhone-carrying crowd. Others find the higher-powered, bigger-screened Android devices better suited to their changing habits - watching video, writing Chinese characters - while the cost of switching devices is lower than they expected, given that most popular social and gaming apps are available for both platforms.

Janet Chan, a 25-year-old Hong Kong advertising executive, has an iPhone 5 but its fast-draining battery and the appeal of a bigger screen for watching movies is prodding her to switch to a Samsung Galaxy Note II.

"After Steve Jobs died, it seems the element of surprise in product launches isn't that great anymore," she said.

To be sure, there are still plenty of people buying Apple devices. Stores selling their products in places such as Indonesia were full over the Christmas holidays, and the company's new official store in Hong Kong's Causeway Bay has queues snaking out of the door most days.

But the iPhone's drop in popularity in trendy Hong Kong and Singapore is mirrored in the upmarket malls of the region.

"IPhones are like Louis Vuitton handbags," said marketing manager Narisara Konglua in Bangkok, who uses a Galaxy SIII. "It's become so commonplace to see people with iPads and iPhones so you lose your cool edge having one."

In the Indonesian capital Jakarta, an assistant manager at Coca Cola's local venture, Gatot Hadipratomo, agrees. The iPhone "used to be a cool gadget but now more and more people use it."

There is another influence at play: hip Korea. Korean pop music, movies and TV are hugely popular around the region and Samsung is riding that wave. And while the impact is more visible in Hong Kong and Singapore, it also translates directly to places like Thailand.

"Thais are not very brand-loyal," says Akkaradert Bumrungmuang, 24, a student at Mahidol University in Bangkok. "That's why whatever is hot or the in-thing to have is adopted quickly here. We follow Korea so whatever is fashionable in Korea will be a big hit."