Support for GCN architecture and DirectX 11.1 comes along with the new power houses.

At the International Consumer Electronics Show, AMD announced the launch of Radeon HD 8000 series for OEMs. It has been a ritual for companies like AMD and NVIDIA to revamp their graphics cards each year by adding some new functionalities and carrying on with the same naming configuration as the previous generation, leaving the existing premium customers in desire for upgrading to the new ones. This time the Radeon HD 8000 series is adding DirectX 11.1 support along with the company's new AMD Graphics Core Next (GCN) architecture.

The Mobility series include Radeon HD 8500M, HD 8600M, HD 8700M and HD 8800M and these models have already started shipping with manufacturers like Asus and Samsung with Lenovo and other OEMs to follow soon. These new Mobility series GPUs features AMD Enduro Technology for making them more power efficient than current generation GPUs. For Desktops Radeon HD 8000 series features the same DirectX 11.1 support along with PCI Express 3.0 and AMD ZeroCore Power technology for power savings while the desktop enters idle state. The availability of the Desktop graphics is set for late January 2013 with select OEMs.

Below is a comparison of specifications with previous generation HD 7000 series compiled by Anandtech. 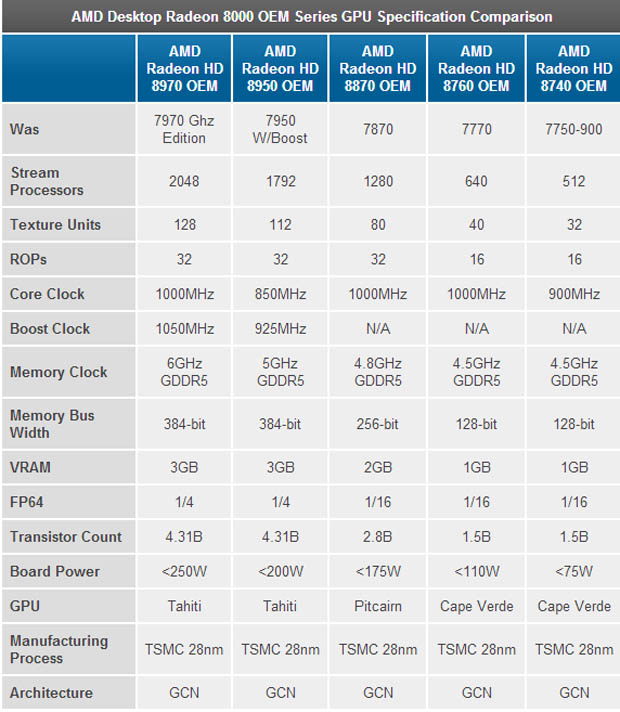