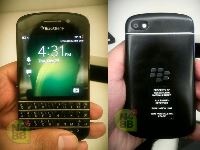 BlackBerry is in the news these days, and for the right reasons. Manufacturer RIM seems to be readying yet another smartphone in the N-Series, known by the production code X10. Running the upcoming BlackBerry 10 (BB10) OS, this device sports a QWERTY keyboard that stretches from left to right, and a rather small screen that appears to be not more than 3" in diagonal size. This is too small in a world of touch devices with screen sizes ranging between 4" and 5". It is not known whether or not this is a touchscreen. The keyboard also doesn't appear to have the characteristic curved BlackBerry shape.

The rear of the phone has a camera with flash, which appears to be possibly Xenon-based rather than LED. The back and the battery cover appear to have a matte finish, which doesn't look like something on a premium device. Being an engineering sample, it says on the back that the evaluation unit belongs to RIM and is not for sale or lease.

While we await the launch of the BB10 on 30th January, screenshots have been posted on CrackBerry forums, showing a new feature of the BlackBerry Messenger (BBM): Video chat. The screenshots show BBM Video including face-to-face video calls and screen-sharing features. Other discernible features include collaboration, capture, organising content using BlackBerry Remember, and sync. While they are not actual screenshots taken by a user from a device, they seem to be taken from presentation documents shared by RIM under NDA. They do appear authentic.

RIM seems to be determined to make it big with BB10, which is said to have been prepared from scratch — with not a single code taken from earlier versions. The BB10 launch being just around the corner leads to speculation about whether this is a gaffe on RIM's part — or a publicity stunt to hype the unveiling of the new mobile OS from the beleagured company. Check out the photos and screenshots in the image gallery.