The first HTC device to sport a 720p display. 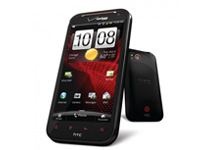 Following in the Galaxy S II LTE's and Optimus LTE's footsteps, HTC has revealed its 4G phone, the Rezound. The device's 4.3" display encased in Gorilla Glass has 1280x720 pixels. The phone will run Gingerbread for now, but HTC has promised an Ice Cream Sandwich update early next year.

The phone is powered by a 1.5 GHz dual-core CPU, and has 1 GB of RAM. The 8 MP camera is capable of recording 1280p video. A secondary 2 MP camera is also present. Other bells and whistles include Wi-Fi, GPS, Bluetooth, and a 1620 mAh battery. An interesting feature is the official Beats Audio integration that is not just about the earphones, but also goes down to the chip level.

The Rezound is set to cost $300 for a two-year contract in the US. However, HTC hasn't shed light on the worldwide release as of this writing.