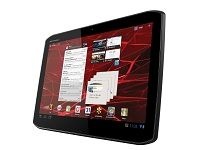 The world's first Honeycomb tablet, the Motorola XOOM didn't quite sell as much as Google and Motorola expected. There were quite a few reasons for that, with the most important one being the newness of the platform while the iPad's sales were at its peak. Motorola has now decided to give this thing another go with the launch of the two new tablets, namely the XOOM 2 and the XOOM 2 Media Edition. The XOOM 2 is pretty much the same as the original XOOM but with a few changes. The XOOM 2 Media Edition, however, is a tad different from the tablets that we see in the market, but more on that later.

The XOOM 2 is the successor to the XOOM we saw a few months ago with a few changes as we mentioned. We are, however, disappointed with the amount of changes that Motorola has implemented in the new tablet. Besides the processor, and a few cosmetic tweaks there is nothing new here. The new Motorola XOOM 2 has borrowed a few elements of its design from the Motorola Razr which was announced just a few days ago. The tablet has something known as the Splash-guard, which protects the device from accidental water spills. While it sports the same 10.1" HD display with Gorilla Glass and the same 5 MP camera sensor has been borrowed from its predecessor, the downside here is that there is no dual LED flash this time with Motorola replacing it with a single LED flash. Also, the front facing camera sensor has been downgraded from 2 MP to 1.3 MP. The XOOM 2 will be running on a 1.2 GHz dual core processor (the chipset is not mentioned), 1 GB of RAM and 16 GB of built-in storage. The claimed battery life of the XOOM 2 is above average, providing up to 30 days of standby time and lasting more than 10 hours with frequent use of web.

Motorola is currently launching the Wi-Fi only version of the tablet with no information about 3G variant(s). The highlight of the device is its body weight and thickness. The XOOM 2 weighs about 599 grams, which is about 131 grams lighter than the original XOOM and has a thickness of 8.8mm; a good 4mm slimmer. We can therefore say that the company has gone through a lot to improve the design and aesthetics of this new tablet.

Now for the XOOM 2 Media Edition. This new tablet is slightly smaller than the conventional Honeycomb tablet that we see in the market. It comes with an 8.9" HD display with Gorilla Glass, and will feature the same 5 MP rear camera sensor and the 1.3 MP front facing camera as on the XOOM 2. It also features a 1.2 GHz dual core processor along with 1 GB of RAM and 16 GB of storage, and is obviously lighter than the XOOM 2 weighing 386 grams and is slightly thicker at 8.99 mm. The battery is relatively smaller, hence it is capable of just a touch more than 6 hours of web usage and also 3 days of music playback (no standby time is mentioned), according to official specifications.

Both the tablets will run on Android 3.2 (Honeycomb) with a possible upgrade to Ice Cream Sandwich in the future, though Motorola hasn't mentioned any future update plans. The tablet will make way to the UK and Ireland by mid November with other markets to follow soon. We can expect the tablet to hit India by December or by January next year. There is no word on the pricing of these two tablets yet. Frankly, there is nothing fancy about both the tablets besides a few changes here and there. We like the XOOM 2 Media Edition though, only for being the most unique of the two. Watch the Motorola commercial below for a rundown of the features of the two tablets.