Handset manufacturer's future heavily depends on the fate of the upcoming OS for tablets and smartphones. 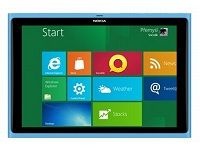 Nokia's plans for the future are pretty much based on its agreement with Microsoft to produce smartphones running on Windows Phone 7. However, MS has a lot of other things to deal with — Windows 8 in particular. The platform is yet to be shipped to developers and manufacturers, so we have no idea when we'll get to see a Windows 8 tablet in action. While manufacturers such as ASUS seem to be in the running to launch a Windows 8 tablet in the future, the Finnish mobile maker has not been forthcoming with its plans until now.

CEO of Nokia Stephen Elop recently shed some light on the company's future intentions, with the focus being on the likes of the Lumia 800 and 710 for the time being. Speaking to the Financial Times, Elop said, "I will point out that one of the things that we are excited about in terms of support for the Windows Phone are the announcements made around Windows 8 for tablets and personal computers. When you see the user experience from the Nokia Lumia environment appearing on hundreds of millions of tablets and PCs in the future, you can see that there is a clear synergy between all those environments. So that presents an interesting opportunity for Nokia".

It will certainly be interesting to come across a Nokia tablet, especially since the company has not been having a great time with its Symbian smartphones that have launched in 2011. All hopes are riding on the Nokia's Windows Phones, starting right from the Lumia 800, which has received some attention already. Any plans to launch a tablet in the future will heavily depend on how the new range of smartphones fares in the market.