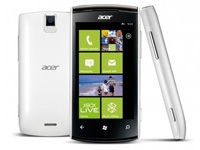 Acer has launched its very first Windows Phone, the Allegro, in France. The specs however, aren't extraordinary. This suggests that Acer is targeting the mid-range smartphone segment, hoping to compete with the likes of Nokia's Lumia 710.

The phone will hit the French market by the end of November and is expected to cost around 300 euros (approx Rs 20,000). It will come in white and black; however, there's no word on the worldwide release as of now.