Squeezing the phone to answer no longer seems like science fiction. 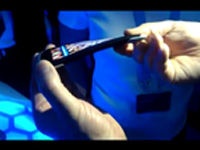 Remember Nokia's Morph concept? Chances are, we might get something close to the original idea in a few years. Nokia showed off its Kinetic concept, created by NRC (Nokia Research Centre), at the recently concluded Nokia World 2011.

The Kinetic prototype is a flexible device that includes a fully-bendable display. To make use of the device's physical capabilities, the company has built an interface around it. This involves navigating through music and photos by twisting the gadget. Bending the edges zooms in and out, while further twisting pans around the zoomed image. According to Nokia, the UI can be placed on top of any current OS. Here's the live demo video:

At this stage, the device lacks phone functionality, but I assume it won't be that challenging considering the progress made till now. The company doesn't want to entirely replace touchscreens, but is optimistic about providing an additional way to interact with devices. The video below provides an indication of how Nokia wants the end product to be: