The 7" ultra-low-cost tablet is finally a reality. 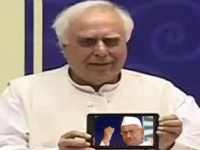 India's much awaited super-cheap tablet is now officially launched. Originally known as Sakshat, the device has now been named as Aakash. Manufactured by UK-based DataWind, the tablet costs the government Rs 2250 per unit. A total of one lakh units will be acquired initially. During the launch event, the generous HRD Minister Kapil Sibal distributed 500 gadgets in New Delhi.

Aakash is powered by a 366 MHz CPU with a graphics accelerator and 256 MB of RAM. Its 7" resistive touchscreen display has pixel dimensions of 800x480. Other features include GPRS, Wi-Fi, a 3.5 mm jack, USB port, and 32 GB memory card support. The device will run Android 2.2 (Froyo) and will be capable of displaying 720p video.