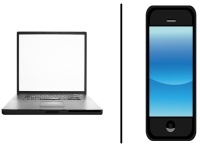 Via CXOToday.com: India's fast-growing mobile internet usage has actually surpassed the country's use of fixed-line web connections. According to measurement firm StatCounter, during August 2012, web access in India via mobile accounted for 51.63%, while that from desktop devices made up the remaining 48.37%. One of the key reasons for the phenomenal growth of mobile internet usage is the lower overhead involved in owning a mobile. What has further fuelled the growth is a plethora of affordable mobile phones coupled with cheap internet plans, which can cost as little as Rs 150 for 8 GB per month. Also, device-agnostic web browsers such as Opera Mini deliver a good surfing experience even on a basic GPRS-enabled phones.

The growing smartphone market too has significantly contributed to this trend. However, India's smartphone penetration continues to be low, even within the APAC region. According to IDC's latest survey of the top five markets for smartphone shipments, which includes China, US, India, Brazil and UK, the nation is poised to stand fourth in this year's ranking at 2.5%. The report further indicates that the Indian market seems to have great potential, with the introduction of low-end smartphones priced around $100.

While India's mobile internet usage has surpassed desktop Web access, its internet penetration rate continues to remain below 10%. A lack of awareness of the benefits of internet-enabled devices plays a large role in this divide.

The StatCounter figures quoted here are based on data compiled from over 15 billion page views, so they might not be entirely accurate. They do, however, indicate the general trend. Indian telcos, despite regulatory and infrastructure hurdles, have a done a commendable job in terms of providing connectivity to every corner of the country.

A few years ago, a national daily carried a report about a village that had mobile network coverage but no electricity. Mobile users had to travel for kilometres to a nearby town to recharge their phones. This is still relevant, as the majority of the country grapples with erratic electricity supply. Yes, there is still a long way to go before India's internet penetration rate can match that of China's, but at least we're moving in the right direction.