Festival offer to last for a month. 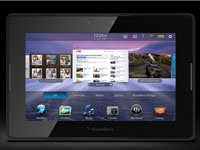 Research In Motion (RIM) has announced that it will give away a free BlackBerry Curve 8520 on every PlayBook tablet purchase. While it has been disguised as a Diwali offer, it does seem to be the company's attempt to woo Indian consumers to buy its tablet in favour of its competitors including, the iPad 2, Galaxy Tab, Motorola Xoom, etc.

Customers making purchases from October 18 to November 30, 2011 are eligible for this offer.