Portable wireless storage for up to three iPhone, iPod, and iPad users. 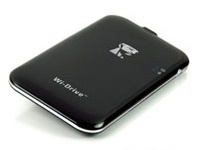 The price difference between a 16 GB and 64 GB iPad (3G or Wi-Fi) is exactly Rs 10,000. If you believe that's too much to waste on a few gigabytes of flash storage, last week, Seagate India announced its GoFlex Satellite drive. It provides a 500 GB, Wi-Fi capable HDD that can be shared between three tablet \ smartphone devices for Rs 11,500. However, if you fancy a similar solution with considerably lesser storage space and a higher price tag, you are in luck because Kingston has launched its Wi-Drive portable flash drive in the 16 GB (Rs 10,000) and 32 GB (Rs 12,000) variants.

Unlike the Android and iOS friendly GoFlex Satellite, the Wi-Drive is compatible only with the iPhone (3G, 3GS and above), iPod Touch (3rd and 4th generation), and iPad. Kingston's media server employs integrated Wi-Fi capability to allow up to three iOS users to wirelessly share media and overcome the physical storage limitations of their Apple products. This is achieved using the Wi-Drive app, which is a free download on the App Store. The slim drive houses a rechargeable battery that is claimed to last for up to four hours. The Wi-Drive is backed by a one-year warranty.

Prima facie, the Kingston Wi-Drive seems rather pointless when compared to Seagate's GoFlex Satellite. This is especially true since choosing the former entails a colossal 94% reduction in storage space and no Android support for what is essentially a very similar product. Being flash-based, Kingston's offering may turn out to be faster at random read \ write access. However, any increase in transfer speeds, if at all, will be subject to the weakest link - ie, the Wi-Fi interface. To be honest, there's no perceptible difference between flash and magnetic storage implementations for streaming applications. Having said that, it would be unfair to reach a conclusion without a proper review.

For more information, visit the official website. Here's a video that explains how the Wi-Fi media server works: