Meanwhile, Tim Cook performs a victory dance as Dell and HP sulk in the corner. 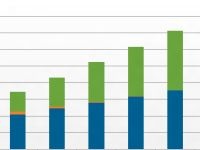 According to a report published by DisplaySearch, an NPD Group subsidiary, tablets are expected to become highly popular in the coming years. It has claimed that this surge in tablet shipments will help it exceed the number of laptops units moved as early as 2016.

The report predicts that overall shipments of portable computing devices (laptops and tablets) will increase from 347 million units in 2012 to over 809 million units by 2017. Although the picture doesn't look rosy for the laptop market, it will still see a growth from 208 millions units to 393 million units during the same period. However, this is nothing when compared to the phenomenal growth — from 121 million units to 416 million units — projected for tablets.

This doesn't come as a surprise, since most top-level executives (including our bosses at TechTree) are replacing their good old laptops with shiny new iPads. True, the productivity of these tablets is a matter of debate, but then again, do you really expect top management to actually work?