As the iPhone Turns 15, We Look at its Future | TechTree.com

As the iPhone Turns 15, We Look at its Future 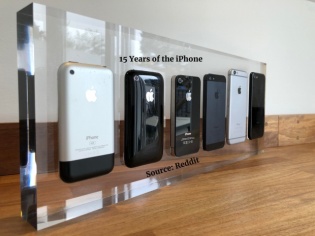 Ever since Steve Jobs introduced the touchscreen smartphone on June 29, 2007 (Samsung beat Apple to it back then), the iPhone has become somewhat of a benchmark device for the rest of the industry to aspire for. After a decade-and-half of existence and obvious market traction, we look at what could be the future of this iconic handheld device.

Before we delve into the future, let's see what Apple's development team has brought us over the past several years.

Catalyst to the core

If the touchscreen was an innovation, the software-to-hardware synergy made the device more effective than any in terms of getting the best bang for the processor. The app ecosystem ensured that security-wise, the iPhone always had an edge over Androids.

The fingerprint technology and later the face recognition made the device safer for users as the smartphone game got tougher with a slew of Chinese products hitting the market. Screen sizes grew and so did the capabilities of the processor and the cameras, to the point where full length movies were shot on the iPhone including an Indian one.

Apple was often the catalyst of innovation (possibly because of their huge cash reserves that went into research and development). The digital assistant Siri was laughed at initially but is today at the core of non-touch commands and implementation on the iPhone, helping us define how we use the smartphone to make our lives easier.

More recently, Apple introduced the People Detection feature on the iPhone 12 and onwards to detect when others are nearby - a feature that may not enthrall a majority but is effective for those with visual impairments. Light detection and ranging (LIDAR) and AI are amongst the features that we expect the iPhone to swear by so that others follow in due course.

Taking things to the next level

Analysts who've tracked Apple for years are convinced that future iPhones could redirect focus from itself to everything that is developing around it. Of course, incremental enhancements of the camera, displays and processors may continue but the future may be of smart glasses, Airpods, Apple Watches and CarPlay all rolled into one with the iPhone at the hub.

In other words, the next phase of smartphone efficacy could be defined by what all it connects with in and around us. In this journey, we could see smart glasses appearing soon, given that all Apple competitors such as Meta and Google have their own versions out - albeit as standalone devices capable of working with other devices.

However, when Apple gets on board, the chances are that it's rumored AR-powered glasses may allow users to ditch the phone screen itself for a virtual reality experience. The same goes for Apple Watches and AirPods, not to mention the upgraded HomePod likely to arrive in 2022. All of this indicates that the iPhone will be the hub with spokes driving out in all directions.

But that's not all

Apple also seems to be giving subtle hints that connecting tech gadgets isn't the end game. They are shifting into the wallet space that could weave the smartphone even into the non-digital aspects of our existence. Digital IDs for Apple Wallet and Tap-to-Pay have turned the iPhone into a contact less payment option for businesses. The Apple Pay Later option means the company is moving into the FinTech payments business as well.

Another certainty is the Lidar technology that arrived two years ago but is still some way from fulfilling the company's AR ambitions. Experts believe that the technology needs to get real world mapping to more accurate levels, which we believe could be happening as we speak, given Apple's focus on virtual reality headsets.

And this is where artificial intelligence could step in. Lidar's depth-sensing skills depend on the processor's ability to analyze 3D data, something that it has attempted with the Apple Watch. The device uses AI data from sensors to track sleep in addition to other actions like working out or even washing one's hands.

While all of these indicate the possibility of the iPhone becoming the hub of an IoT universe around the users, we are still unsure whether Apple will bite the bullet and look at the form factor of the device, which has remained almost unchanged. Or will they fold up as they were back in 2007 - no pun intended.