Alexa's New Feature Could Spook You Out - Dead Person Talking 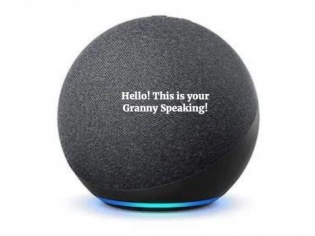 One cannot fault Amazon for trying new things. Having got movie stars to dub for their Alexa, now the company is toying with a new idea of getting long deceased relatives to become the voice of your digital assistant. Now it is up to us to decide whether we love this feature or it spooks us out of our wits.

The technology was revealed at Amazon's annual machine learning, automation, robots and space (MARS) conference recently. Of course, one cannot question the intent of those behind this innovation as they only want to "make memories last". And it is up to us to figure out whether we want them to last or not.

The company's SVP and Alexa Head Scientist Rohit Prasad reportedly demonstrated the feature at the conference where a video saw a child asking Alexa to read a bedtime story in the voice of his dead grandmother. The real story behind the story is that Amazon was able to achieve this with just a minute's voice of the deceased person as compared to hours that it takes others to do so.

The company did not bother telling us whether the feature would find its way into Alexa any time soon or was just something to showcase as a capability within Amazon. Readers would recall that the underlying technology has been in vogue for several years now and many tech majors were wary of using it for fear of it being misused.

Microsoft was among the earliest to express caution about the digital voice-doubles on grounds that these could be easily manipulated to carry out voice-led commands on devices. Imagine if such a voice can be reproduced to unlock a car or even a home in the internet-of-things world that everyone is raving about?

On their part, Amazon said the effort required researchers to produce high quality voice with less than a minute of recording. Prasad said this was achieved by making it a voice conversion experiment as against a speech generation option. He held the view that the artificial intelligence led efforts are science fiction to reality.

Suffice to say that the experiments appear innovative but don't really pass muster when it comes to the matter of AI ethics, which Microsoft had recently shared via a blog post.