Amazon Comes up with Its First Autonomous Warehouse Robot | TechTree.com

Amazon Comes up with Its First Autonomous Warehouse Robot 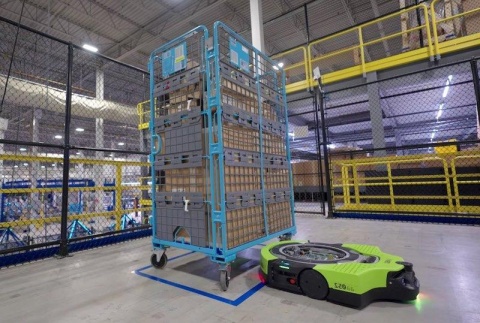 Giant eCommerce companies have continuously sought to sideline human interventions in their day-to-day operations. Now Amazon has taken a step towards virtually eliminating it even from their warehouses through the services of its first fully autonomous mobile robot that can move things around the place.

The company announced this development and shared a video that shows the robot, named Proteus (watch the video) moving things around in a section of Amazon's warehouse and going about its business in a silent fashion. In fact, even the video appears to be strangely very silent with only a few lights indicating the movement.

The robot is capable of identifying hurdles and humans using a ray of light that shines in front of it. Once a human steps on the beam, the Proteus stops moving and resumes only when the person shifts position. This isn't the first robotic system that Amazon has announced. It had come out with Cardinal, a robotic arm capable of lifting and shifting objects weighing up to 22 kgs. The company would be deploying these some time in 2023. The robot is capable of finding and lifting packages even when they're piled up at a spot.

This isn't the first robot

In addition to the warehouse robot, Amazon also displayed technology that allows employees to bid adieu to the barcode scanners. The video (watch it here) shows workers standing before a camera system that recognizes the packets without even having to scan the label. However, the company hasn't shared details on how the new system works.

However, at first glance it appears to be using some sort of a combination featuring machine learning and a 120 fps camera to create an effect that is quite similar to Amazons' Just Walk Out technology that allows it to build and operate cashierless stores.

What happens to humans?

In the past, Amazon had attempted to reinforce its belief on human intervention by stating that it had no plans to build robots in lieu of people. However, that being so, reports claimed that the company would struggle to find willing workers, given that their tenures may well depend on the next wave of robotic innovation.

A report published by Forbes some time back had quoted an official at Amazon's robotic division to suggest that replacing people with machines was a fallacy that could result in a company actually going out of business. However, the source reinforced the idea that robots do have a role in hastening the pace of work that humans struggle with and do so with a safety first approach via automated management systems.

Amazon is at pains to explain that most of the new robotic interventions are aimed at improving safety standards. While the robotic arm functions at locations where workers would be lifting and twisting heavy packets that could result in injuries, Proteus would reduce the requirement of having people manually move and shift heavy objects.

Last April, Amazon's CEO had promised to address injury rates at their warehouses. What he did not tell us then was that Amazon's workers get hurt at nearly double the industry average. All he did was describe such reports as a misunderstanding.