Home » News » Charge two devices at the same time with the Power Adapter Duo by Sams...

Charge two devices at the same time with the Power Adapter Duo by Samsung | TechTree.com

The Samsung Power Adapter Duo is compatible with a variety of devices including, laptops, tablets, wireless chargers, smartwatches 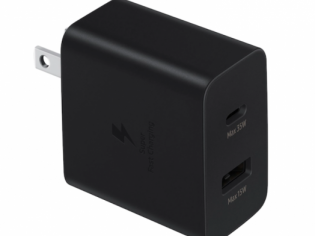 This power adapter has two power output ports that can charge two smartphones at once. It can even charge both Android and Apple together as one port is 35W (Type-C) and the other is 15W (Type-A).

The Samsung Power Adapter Duo can also be used to charge power banks and wireless earbuds. This new adapter can charge Samsung Galaxy devices in half the time than regular chargers.

Samsung customers can expect Samsung to remove charging bricks from retail boxes to address the issue of sustainability. Several companies like Apple have already done this.