The Motorola India Twitter account has posted the teaser indicating the launch of the Motorola Edge 20 Pro. 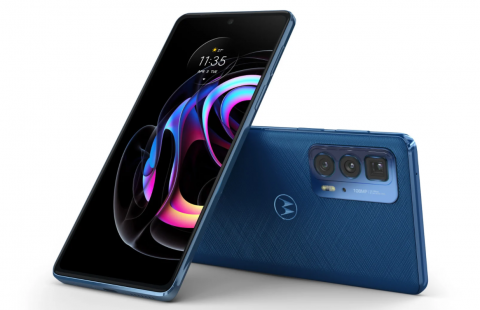 Motorola Edge 20 Pro India will launch soon. The Lenovo-owned company posted a teaser image on Twitter that shows the camera setup of the flagship phone with a “coming soon” tag. The Edge 20 was unveiled alongside the Motorola Edge 20 and Edge 20 Lite in late July.

The teaser doesn't contain the exact name of the smartphone, though the image seems to have the triple camera setup.

Flipkart has shared the list of phones will be available for purchase during its Big Billion Days sale. That list includes a Motorola phone launch for October 1.

In August this year, Motorola India Head Prashanth Mani confirmed that the Motorala is planning to launch the Motorola Edge 20 Pro in the country.

Motorola Edge 20 Pro price in India has not yet been revealed. However, in Europe the phone starts at EUR 699.99 (roughly Rs. 60,500) for the 12GB RAM + 128GB storage variant. The phone comes in Midnight Blue Colours and Indigo Vegan Leather.

The Euro version of Motorola Edge 20 Pro comes with a 6.7-inch OLED display which supports 144Hz refresh rate and has HDR10+ support. The phone also has an octa-core Qualcomm Snapdragon 870 SoC, with 12GB of LPDDR5 RAM. It has a triple rear camera setup that has a 16-megapixel secondary sensor with an ultra-wide lens, an 8-megapixel sensor with a 5x high-res optical zoom periscope lens, and a 108-megapixel primary sensor. It is claimed that the periscope shooter offers 50x Super Zoom support.

For video chats and selfies, the Motorola Edge 20 Pro has a 32-megapixel selfie camera sensor at the front. The onboard storage on the phone is 256 GB. It packs a 4,500mAh battery with 30W TurboPower fast charging support.