In the increasingly nasty world of cybercrime, getting into a data tunnel is the only way to stay safe online

The Covid-19 pandemic has altered lives as no other event in the past few decades. On top of the general air of uncertainty and gloom, the forced locked down of people in their homes has resulted in a situation where for everything from work to entertainment we are reliant on the internet and our computers or smartphones. In fact, the old adage about necessity being the mother of inventions rings true now than ever before. What appeared impossible a couple of months ago appears not only possible, but is getting validated to a point where some of us may wonder how it would feel like when things normalize and we stop working from home. Much of this has been made possible due to the technology that connects people to outside networks with proper safety precautions so that staff can be in touch with each other, customers and even stakeholders from their living room couch. A key factor behind this success is the VPN or the virtual private network. 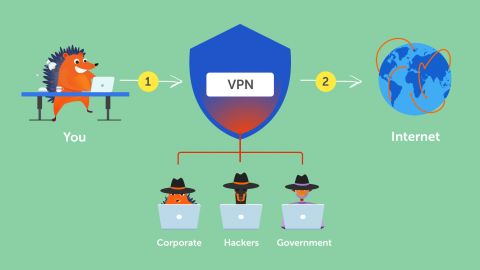 In case small and medium enterprises aren’t yet on some sort of VPN, it is good to be aware that traffic on Wi-Fi networks, whether password protected or not, can be sniffed and used to steal identities for fraud and other malicious acts. While connected to the VPN, the data is encrypted so an attacker may know you’re connected to a public hotspot, there’s no way they can figure where the traffic is headed. And, the faster we connect to an Indian VPN, the better.

Most of our readers would be aware of what a VPN is but as they say, what’s wrong in repeating the well-known? The virtual private networks are secure connections that allows a user to connect to other similar networks remotely and securely. The data encryption at both ends is what makes these networks secure and safe.

So, when one connects to a network, it is direct and open which means anyone can break in from anywhere. While this may be okay for some of us using the internet just to catch the world news, it is not so for most who access sensitive data, both personal and official. A VPN functions as a tunnel that connects to a server which in turn communicates with the network to send and receive information sought by the users.

The benefits of using a VPN has always existed in the market though it is only in recent times where working from home has become a necessity that it has suddenly become a value proposition tough to ignore. However, there are some parameters that users, especially those in the SMB space, should consider before going with a VPN service. Here are some broad aspects that could be analysed:

So, in case you are not a fan of VPN and consider it an avoidable expense, think again. Because what one spends on a VPN annually would be peanuts compared to the loss of data and privacy that one has to endure over open networks.