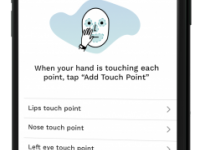 Anything to do with coronavirus makes news. Small wonder then that a bunch of smart techies in the United States, who created a wearable device to counter trichotillomania, is now re-presenting the device as something that would buzz each time the user’s hands moves in the direction of her face.

Okay, so what is trichotillomania? It is a mental disorder that compels people to pull out their hair. So, if you felt like doing so when stuck in traffic around your city, think again because it come be part of obsessive-compulsive related disorders. The 5-year-old start-up uses position tracking technology on devices that control repetitive behaviour patterns.

Now the founders are claim via their website that they are releasing a redesigned wristband called Immutouch that would vibrate each time users moves towards their face. Its accelerometer senses hand movements ten times a second and based on calibrations while setting it up, buzzes when the hand is close to the eyes, nose or mouth.

It also provides a companion app that helps provide users track their behaviour pattern so that one can become aware of the movement tendencies and curb it.

“Common pathogens like flu, coronavirus, and the common cold enter your system through the porous mucous membranes in your mouth, nose, and eyes. Unless you just washed your hands, it’s possible you risk infection any time you touch your face,” says the new website that links from Slightly Robot, their original start-up founded in 2015.

The wristbands went on sale in the United States and costs $50 a piece and are getting shipped immediately. The company wants users to wear the device on their dominant hand which is more likely to approach the face or even get one for each arm in case one is ambidextrous by nature.

The website quotes global warnings on tackling the coronavirus and shares blurbs of comments that organizations and hospitals have made. Take this for example: "Avoid touching eyes, nose and mouth. Why? Hands touch many surfaces and can pick up viruses. Once contaminated, hands can transfer the virus to your eyes, nose or mouth. From there, the virus can enter your body and can make you sick." This is part of a statement released by the World Health Organization. The idea is to build awareness around involuntary human movement. On average, people touch their face 23 times per hour. Every time you touch your face, Immutouch vibrates, making you aware of an otherwise unconscious behaviour. By making you aware of each occurrence, you’ll stop the habit of passively touching your face, the website says.

Media reports quoting the co-founders of the start-up say that the company isn’t in the business of making money over this innovation and that they were selling it at cost that accounts for material, fabrication, assembly and handling.

Given that Slightly Robot isn’t the true-blue start-up funded by angels or venture capitalists, the statement rings true. The founders used a 2016 grant from the University of Washington to research on an auto-immune disease that afflicted a family member and have since bootstrapped their way forward.