If you read the headline and do not bother clicking on it, we won’t blame you because this is like the most ill-kept of secrets that one could find in the global smartphone industry. For, the Korean giant Samsung and the world’s most valuable company Apple have for dictated this market for close to a decade now.

So, why are we even bothering writing this piece? Only to bring forth the point through a recent market research that barring Oppo’s A5, none of the other smartphones could break the hegemony of Apple and Samsung which sold nine of the top ten smartphones across the world during 2019. 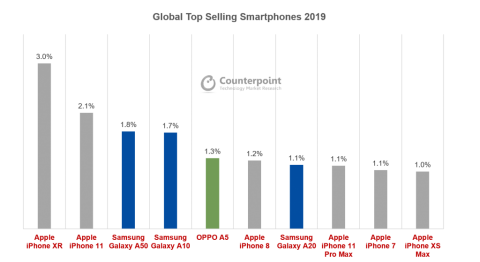 Counterpoint Research goes on to state that the iPhone XR was the best-selling model and represented a whopping 3 percent of all phones sold in 2019 with the Galaxy A50 being the top Android model accounting for 1.8 percent of this number.

While Apple ruled North America and took up the top five slots and two more in Europe, the rest of the world belonged to Samsung. The Korean giant held the top-five slots in Europe, Latin America, the Middle East and Africa and most of the APAC region. As for China, well it was no surprise that Oppo, Vivo and Huawei ruled the roost.

Giving details about its Market Pulse research, Counterpoint says  the iPhone 11 became the second-best selling model globally despite a launch in September. The lower price could have been the motivator the high sales, says the report authored by research analyst Varun Mishra who believes that this could indicate the power of iPhones during the holiday season sales.

The report says Apple is closely followed by Samsung which has three models, all from the A series, among the top-10. With features such as OLED display, multiple cameras and in-display fingerprint sensors, these devices proved to be good value propositions for buyers who took to the revamped A series to give Samsung a thumbs-up in the mid-tier phone market.

The top 10 models alone captured approximately 15% of the global smartphone sales. 5G still contributed to only 1% sales in 2019 hence, there were no 5G models among the top 10. However, this might change in 2020, as the networks roll out, Apple launches its 5G iPhones and 5G devices enter lower price tiers, the report says. It was tad intriguing that Huawei, which has moved to second position in the global smartphone sales volumes, didn’t feature a single device on the top-10 list. This could have been the result of the US-China trade disputes that led to reduced exports from the mainland to other geographies.

As for India, the one real story was RealMe devices which made a strong presence in India and some southeast Asian markets with the C2 model. The company registered a crazy sounding 426 percent year-on-year growth but wasn’t sighted on any other top-10 lists.

Though the story appears to give a boost to Samsung and Apple as the prime players in the smartphone market, one needs to keep in mind that brands such as Oppo, Vivo and OnePlus fail to make the top-10 lists due to their penchant for launching multiple devices that skews the data in favour of competitors who bring out just one or two models a year.

At another level, these numbers are also suggestive of a consolidation in the market with more and more manufacturers reducing the number of annual offerings to keep themselves on the radar. Ironically though, such a move could mean lesser options for users, which however translates into reduced hardware garbage on the planet.