It’s barely a year since we saw and slammed the Samsung Galaxy Foldable phones and followed suit by writing about all that’s wrong with the Moto Razr Flip and more recently the Galaxy Z Flip. Looks like the foldables are already folding up as a technology as the new buzz in the market is about a sliding smartphone that doesn’t need to bend back to broaden.

According to CNET, mobile phone brand TCL is currently working on a model that would slide-out into a bigger screen instead of folding up as the latest Samsung and Motorola phones do. By the looks of it, the slide phone would give users the screen space of a tablet without necessarily having to lug it around.

There were reports that TCL had lined up some surprises at this year’s Mobile World Congress which was called off due to the corona virus scare. Writing on CNET.com, Jessica Dolcourt says she’s never seen such a design before where the phone appears to use a continuous display with curved screens on each side. 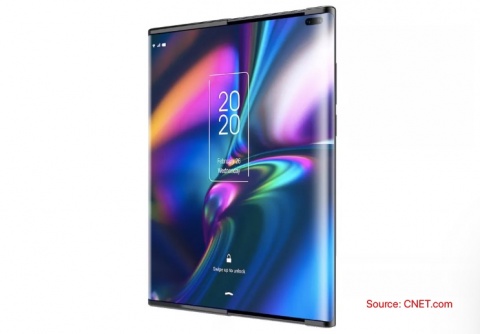 “Between the centre of the phone and the dual front-facing camera along the right side, there's a break in the chassis where you can pull the two sides apart to expose the surplus screen. It'd be much like sliding back the sides of your dining room table to add a leaf that seats more guests,” she writes.

Without setting eyes on the device, it would be difficult to predict its behaviour though one does have a slew of questions even upon seeing the two-dimensional image. For example, wouldn’t the extendable screen require to bend sharply to fit behind the static one? And does it mean that half the phone would be empty when it is in the expanded state?

And how would the microchips and other paraphernalia inside a phone spread across the two sides of the phone? And if they do so, how would they be connected to each other or would they somehow function as standalone pieces of furniture? Highly unlikely as the device needs to function as a single unit both in its contracted and expanded states.

More importantly, TCL may have been seeking to showcase the device at this year’s MWC but that doesn’t really count for much given that the company has shown off several prototypes of foldable devices in the past without actually following up. Earlier at the CES event, the company had presented a foldable device prototype while announcing that it would be going slow on this technology.

Whatever may be the case, we could doubt the veracity of TCL’s claims of a slider phone, but cannot question the fact that companies across the world aren’t yet done with experimenting with the form factor of a device that has become the first amongst equals for people cutting across social strata and geographies.