A Japanese-Israeli collaboration in the field of healthcare equipment is all set to launch a range of futuristic X-ray machines that functions on the principle of digitizing X-rays that could cut equipment costs substantially and help bring this facility to more than two-thirds of the world population to whom it is currently unavailable as a means of medical diagnosis.

The medical imaging company Nanox, which was founded in 2016 by Japanese venture capitalist Hitoshi Masuya and Israeli serial entrepreneur Ran Poliakine, recently secured additional funding of $26 million led by Taiwanese electronics contract manufacturer Foxconn with participation others such as Fujifilm and SK Telecom.

An article published in VentureBeat.com quotes Poliakine to suggest that the latest round of funding takes the total to $55 million which would help it to pursue partnerships with governments, hospitals and clinic chains. Ironically, Nanox is yet to receive regulatory approval for the new X-ray machine called the Nanox.ARC. 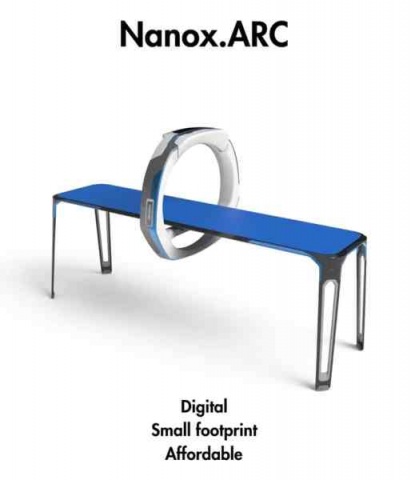 The company claims that the cost of the new machine would be around $10,000 whereas currently the X-ray machines could cost as much as $3 million for a top-of-the-line model. In terms of weight, the Nanox.ARC is also said to be lighter and therefore easier to transport.

The system is designed to promote the early detection of conditions discoverable by computed tomography (CT), mammography, fluoroscopy, angiogram, and other imaging modalities, and it will be offered under a pay-per-scan business model at prices “competitive” with alternatives. (Watch the Nanox.ARC video here)

On its website, the company says that the product is a result of over 15 years of development and is based on silicon micro-electromechanical systems. While existing X-ray machines use heated filaments to create an electron cloud that produces X-rays when pulled towards a metal anode, the ARC uses a field emission array of 100 million molybdenum nano-cones that generate electrons at low voltage. Apart from X-ray, the device will also support other scans such as CT, mammography, fluoroscopy, and angiogram.

In a statement, Nanox Japan CEO Hitoshi Masuya says, “While some companies have made achievements using carbon nano tubes as a basis for field emission X-ray with [a] similar approach to the one used by Nanox, to the best of our knowledge no company has achieved a commercially stable source that can be embedded inside a medical imaging system and operate with an acceptable lifespan.”

The company aims to start shipping the Nanox.ARC in the first half of 2020 with a target of 15,000 pieces over the first two nears. Poliakine claimed that these machines would boost medical research by generating over 300,000 images daily thus ensuring that there would be enough material for AI-based work on medical prognosis.

“Nanox has achieved a technological breakthrough by digitizing traditional X-rays, and now we are ready to take a giant leap forward in making it possible to provide one scan per person, per year, for preventative measures,” he concludes.