Home » News » Will Microsoft Have an ‘Edge’ over Google Chrome?

Will Microsoft Have an ‘Edge’ over Google Chrome? | TechTree.com

Will Microsoft Have an ‘Edge’ over Google Chrome?

Though the two browsers can be called siblings, the fact is the Edge does offer something better when it comes to security and privacy Technology has a way of making fools of the very best. Remember how Marc Andreessen of Netscape had claimed that his company would end Microsoft’s hegemony a quarter of a century ago and the Redmond-based giant did eventually get dwarfed in the browser battle by a search-and-find enterprise that is today straddling the Internet like a behemoth.

While there is no way of knowing what Andreessen would feel when he sees the newly launched Microsoft Edge browser, the fact remains that the likes of Sundar Pichai and his predecessors Sergei Brin and Larry Page would be finding it tough to hide a smirk. Why wouldn’t they for Microsoft’s Edge is powered by the same engine that chugs under the hood of the Google Chrome!

Now, Microsoft has officially replaced its decades old Trident web rendering engine with one that is based on the Chromium open source project, managed by none other than its arch-rival Google. Could this move by termed as a capitulation? Or is it praiseworthy as it suggests that enterprises are open to adopt existing standards to build on?

Remember the days when the W3C (world wide web consortium) set the standards and the rest of the world followed? Well, today that job rests with Google when it comes to browsers as Chrome is setting the path for others to follow. And, follow it is what Microsoft did with the new Edge, which actually mimics most of Google Chrome’s features.

The company, which debuted the Edge barely 24 hours ago, has made it available for everyone to download a stable version just about a year after they had announced plans to move away from legacy software to Chromium. The company proposes to target enterprise users of Windows and macOS initially though others too can download and install it.

Having played around for a while with the Edge Beta (which continues to be alive here), the new browser appears to be significantly faster, comes with more robust security and several new features such as an Internet Explorer mode for compatibility with web apps of a bygone era. Then there is Collections that allows users to gather data from web pages and organize them into shareable documents, which appears to have been left out of this launch.

So, what made Microsoft ditch its own EdgeHTML framework and join the Chromium bandwagon, much to the chagrin of other competitors such as Firefox? Quite simply, why would anyone want to play catch up with Google’s dominance in the area when it makes much more sense to use the open source core engine and devote all the time saved on developing unique features and browser apps? And once such a browser found a place in the Windows 10 suite, the company could also restrict users from shifting allegiance to Chrome.

Though one could describe Microsoft Edge as a sibling of Google Chrome, that is not quite true as for starters the former keeps tracking protection set to Balanced which means several ads get blocked and so do most of the third-party tracking code, which could be a boon for users who find Menlo Park-based company’s intrusive nature.

As part of the migration process to the new Edge from other browsers, Microsoft says that it would do nothing to tweak existing browser defaults and settings. All enterprise customers needing legacy Edge components can blog the upgrades completely and those who have set other default browsers can continue to do so.

It remains to be seen how Google itself now plays it. Would the company use its authority over Chromium to push some of its own services such as YouTube and Gmail? If so, how would Microsoft react to this intrusion? 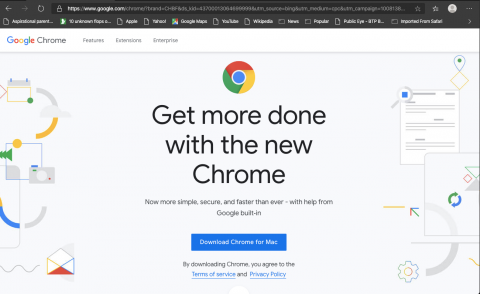 Believe it or not, the first thing that Google did when this author typed Google on the Microsoft Edge is to push one to download Chrome with the promise that it would help get much more done on the web than any other browser!

Looks like Microsoft has hit a smooth road on its browser journey which can now only be made bumpy by a competitor like Google that seeks to lord over all that it perceives.