Satya Nadella Gets a Photo-op With the Surface Duo | TechTree.com

Satya Nadella Gets a Photo-op With the Surface Duo The world has been watching patiently as Microsoft makes yet another attempt to take on the star-studded smartphone market with its Surface Duo and Surface Neo. The company had unveiled the devices last October with the promise that subscribers can get their hands on the hardware by the 2020 holiday season.

Just to prove the point that the smartphone is indeed surfacing on time, Microsoft seems to have accidentally-on-purpose organized a photo op with CEO Satya Nadella who can be seen holding the gadget during an intense discussion with Brian Sozzi, Editor-at-Large of Yahoo Finance during an interaction earlier this week. Of course, the editor wasted no time in sharing the snap via his Twitter handle. 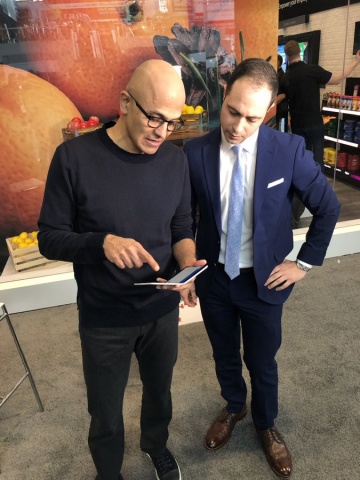 The contours of the phone in Nadella’s hands gives us a clear indication of how pocket-friendly the device will be when Microsoft implements its promised two-pronged approach to dual screen devices. With the Surface Neo and the Surface Duo, the company is hoping to make it big through its dual-screen approach on both PCs and smartphones.

Both are keeping away from the folding display tech that competitors have been going after in recent times, instead favoring two discrete displays. The gadgets would run the latest Windows 10X and by the looks of it, the prototype is in excellent working condition and as a result we can be quite sure that the launch date won’t get postponed.

When the Surface Duo was launched last October, there were several questions around it that didn’t really get answered. Some of these include:

Now that Satya Nadella has brought the conversation back to the front pages, it may be worthwhile to keep close watch on the updates about Surface Duo which could make or break Microsoft’s reputation in the smartphone market, given that this is their first offering after several long years.