Home » News » Watch Out! Amazon is Targeting Your Car Now

Watch Out! Amazon is Targeting Your Car Now | TechTree.com

Watch Out! Amazon is Targeting Your Car Now

The company plans to roll out its Echo Auto device in India later this month, the first country that it’s spreading to after the United States 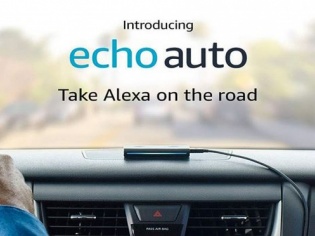 We had predicted some weeks ago that Amazon wants to be the everything of voice and eventually the everything of everything. True to form, the Jeff Bezos-led company went berserk ahead of CES 2020 announcing tie-ups with carmakers Lamborghini and Rivian apart from BMW and Fiat Chrysler vehicles.

The deal is quite simple: Amazon would get you hooked to their Alexa voice assistant and get you to watch the latest edition of Fire TV on these vehicles. In a press statement announcing innovations on the Fire TV edition, Amazon said it was expanding the program to automakers with BMW and Fiat Chrysler Automobiles.

“With hands-free access to Alexa, touch screen interface and offline playback capabilities, parents and kids alike can enjoy the living room TV experience in the car and watch a wide variety of content and the latest shows from the most popular video services worldwide and shows recorded with Fire TV Recast or saved locally on-device. Content can be streamed using a vehicle’s Wi-Fi or LTE connection, a mobile hotspot or any other WAN-enabled device,” the statement said.

The company had invested in an electronic vehicle start-up Rivian some years ago to push the Alexa voice assistant through integration or via the Echo Auto device. Both Rivian and Lamborghini made announcements to this effect though what is more interesting is Amazon’s own comment that it plans to expand Echo Auto to India, the first market outside of the US later this month.

Amazon had already announced the Alexa rollout in General Motors and Volkswagen cars while others such as BMW, Ford, Toyota and Audi have said that they would soon be following suit with the voice assistant powering their infotainment systems.

The company also announced upgrades to its Fire TV through the press statement. With more than 40 million active users, the Fire TV has now become the most used ahead of Roku, the company is now setting its sights to make it the preferred integration for device makers.

“At CES 2017, we announced the first Fire TV Edition smart TV. Now, just three years later, Fire TV Edition has grown into a worldwide program which will include more than 150 Fire TV Edition models across more than ten countries by the end of the year,” said Marc Whitten, Vice President, Amazon Fire TV. “Our expanded Fire TV Edition program provides companies with the services and tools they need to bring Fire TV to more categories and more screens,” the statement said.

A report published on TechCrunch.com meanwhile said that Amazon was also targeting other voice-driven experiences in the car and announced new integrations with companies that offer navigation services like Bosch, mapping companies HERE and TomTom, Telenav and MELCO.