Home » News » Ok Google! We found the technical glitch in you

Ok Google! We found the technical glitch in you

Google assistant’s own technology became the mockery source for it. 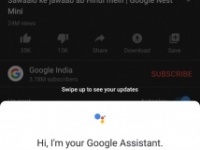 As long as there is reliance on technology, the probability of glitch will also be there. This has got proven by the latest technical glitch found in the advertisement made by Google to promote their Google assistant, “Ok Google”. From makers to quality controllers, all forgot that the advertisement is not fit for android users.

As soon as the ad begins and it says “Ok Google”, the android phone’s “Ok Google” pops up and will leave the ad interrupted.

What do we call this? Technical glitch and human carelessness? Well, a technology cannot be operated without human intervention and it has been proven yet again.

We are walking on the path of automation but we aren’t yet prepared to embrace it completely. Our technologies are far from becoming flawless, at least at this point in time.

In this particular glitch of Google, marketing team or the ad makers couldn’t think that technology can have a loophole too. When we say artificial intelligence and robotics are going to dominate certain sectors, replacing humans, can that really be a possibility? We are clearly at a very superficial level right now when it comes to the adoption of technology without human intervention.

Google assistant is a product of artificial intelligence and the technology itself became the cause of mockery for them.

What we need to understand is technology is just a helper, not the business driver and relying on it could be a disaster for many.

Watch the below attached ad:

Word of caution: If you are an android user too, your ad will be interrupted too.