Not surprising, given that the company has more than 2.4 billion monthly active users, at least some of whom may not be averse to partaking in research for a few dollars 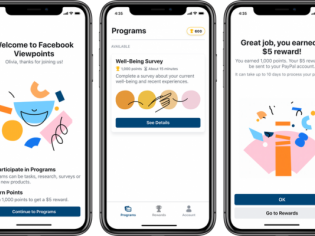 When you have billions of users scrambling to get on to a platform, it makes best business sense to put them to best use. Having served up targeted ads, promoted brands and converted users into influencers in the past, Facebook is now all set to launch a market research and product-testing program that also pays good money for sharing one’s data.

Of course, the program is currently available only in the United States though in every likelihood India could prove to be a happier hunting ground for Facebook, given that its users in India cut across social and cultural strata and most of them feel no affront at having their data used for such research – especially if they are promised a few hundred rupees for doing so.

Seductively called Viewpoints, the app is available for download to anyone over 18 across the United States after which they can begin participating in surveys besides completing online chores on behalf of Facebook or even be on a panel that tests out new apps on devices ahead of launch – in other words assume the role of online bug testers.

In a blogpost published on Facebook, Product Manager Erez Naveh says the best way to make products better is to get insights directly from people who use them. “We will use these insights to improve products like Facebook, Instagram, WhatsApp, Portal and Oculus, and to benefit the broader community.”

So, how does it work? Once the user sets up a Viewpoints account, she gets invited to join programs and before each one, there would be an explanation about what information is being collected, how it would be used and how many points one could receive for completing the program. “We will let you know how many points you need in order to receive a payment, and every time you reach that amount of points, you will receive a payment sent directly to your PayPal account,” says Naveh.

Given the controversies surrounding data privacy in the United States, the blog post clarifies upfront on the sort of data that Viewpoints would request while signing up and the additional information that may be sought at different points in time. The post affirms that Facebook won’t sell user data from this app to third parties or share one’s Viewpoints activity publicly via Facebook.

Josh Constine of TechCrunch.com writes that the first of the surveys (one related to wellness and screen time) takes about 15 minutes to complete and gets the user 1000 points which translates into a $5 reward. The Viewpoint app is available both on Android and iOS and the article says that Facebook would be launching it across more countries in 2020.

By the way, this isn’t the first time that Facebook is going after user data through the backdoor. It had secretly paid people to install a Facebook Research VPN that allows the company to track data on a user’s phone as well as activity on the web. This, despite Apple banning the Onavo Protect app of the company last August for doing precisely the same thing.

The company had sidestepped the App Store to reward teenagers and adults to download the research app and provide it root access to network traffic so that the social network could decrypt and analyze the smartphone’s activity, TechCrunch.com had reported this January. In fact, the reason Apple banned the app was that it violated their policy on data privacy.

Which brings us to the current experiment involving Viewpoints where Facebook may have to work doubly hard to ensure that the app doesn’t get abused in the future. An immediate thought that comes to mind is how the company would stop underage users from using the app, especially since it is rather easy to start an account on Facebook by giving wrong information about age.

In case, the company cannot stop users below 18 years from participating in the program, there is every chance that the lucre of cash could result in coercive behavior online resulting in all sorts of information including ones pertaining to physical attributes getting mapped.

It remains to be seen what sort of a push Facebook gives to Viewpoints in the future, especially given the antipathy that their earlier experiments with paid market surveillance generated following investigations in the United States.