And, Google happens to find itself playing two roles, one of pushing unwarranted messages using data it captures and the other of a cop launching apps to stop these notifications 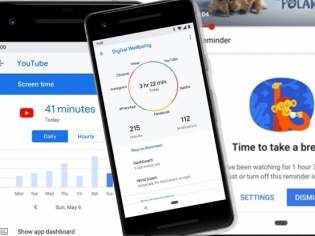 Google recently launched a new digital wellbeing App that helps users control their smartphone usage. Nothing new, given that the iPhone has been peddling something similar that provides details of one’s screen usage and then breaking it down to the items that gained the user’s attention over a pre-defined timespan of a day or a week or even more.

Google has yet again taken a leaf off the iOS handbook and taken it to the next logical level. It suggests that the app would help users find the right balance using technology. Because it has been designed in a manner where one can stay focused while working or performing any activity that needs one’s complete attention.

A report published by Internet Trends, an average smartphone user unlocks their phone 150 times a day and spends 2.51 hours on an average. Also, in a 2010 study by the UK Post Office that was published by Eurescom, the term Nomophobia was coined. It is an abbreviation for “no-mobile-phone phobia.” In other words, the addiction to smartphones can mess up our daily routines, especially if the user finds it tough to ignore the many notifications that the phone sends us through the day.

Google is getting aggressive over this campaign through the digital wellbeing app which is currently available on all Android devices that run on Version 9 and after. With over two billion active users, the platform is being perceived by the company as a good one to spread the message – that Google cares for our wellbeing!

However, there is a flip side to this story. A study conducted by Prof Douglas Schimdt of Vanderbit University and reported in the Economic Times, suggests that Google collects more data of the users using the Android devices than Apple does from an iPhone device. In fact, Tim Cook seems to have played on this ever since the iPhone 11 came on the scene by pointing out that it is the safest smartphone from a privacy point of view.

The study says Google collects enormous amount of data which it further uses to predict the behaviour of the user. What’s more, Android and Chrome sends data to Google even if the user is not interacting. However, Google was quick to invalidate the study and went on a blame game with the author. Of course, it is another matter that internet security firm Kaspersky found the same glitches.

The digital wellbeing app helps people restrict their notifications. The question is why would users listen to Google when they can easily use the settings to ensure that notifications do not disturb them when they don’t want to be disturbed? And if they are unaware of how settings on a smartphone can help them retain sanity, why would a new app from Google do anything different?

Suffice to say that Google is doing its bit for digital wellbeing to ensure there is data wellbeing at their end. With the new app, Google has opened a new way to access data. For example, as people set their preferences in terms of time for receiving and not receiving notifications, Google will have the information and they can leverage it to send advertisements accordingly.

Back in 2018, Google was accused of leaking personal data to thousands of advertisers who bid for users in Google's RTB system. As per the report submitted by Dr Johnny Ryan, Chief Policy Officer at the Brave, Google is using its push technology to share the personal data 2,000+ companies and hundreds of billions of times a day.

Also, it was reported that Google has no control over what happens to the data once broadcasted. In 2019, out of its total revenues of $38.94 billion, its advertisement business earned $32.60 billion. Google is certainly cashing in from serving ads this means that it would continue to introduce new products to gather more data about the users around the world.

Google’s appetite for data was visible through it’s big ticket acquisition of Fitbit whereby it gained a window into our health patterns and habits governing it. Of course, Google isn’t alone in this endeavour as Amazon and Apple were already handling health data through their gadgets. In fact, Google got into trouble with the US authorities over a deal with a healthcare system.

Given that Google has become an integral part of our lives, the question that remains is whether there is any way that technology can be used to ensure both our digital and data wellbeing.