Einstein Speaks Up for Salesforce Customers

Having made its presence felt at homes through Siri, Alexa and Google Assistant, the technology behind using speech commands to work computers is gaining ground on the B2B space 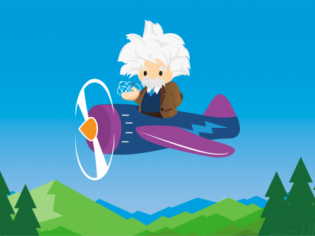 A year ago, Salesforce came out with the idea of using voice assistants to provide added support to their CRM software users. Christened Einstein (we hope there’s no cause for IP concerns here), the voice assistant was supposed to help with faster decision-making, enhancing staff productivity and ensure increased customer satisfaction.

The invitation published in bold headlines then was to “Work smarter with artificial intelligence that’s built into Salesforce.” A year into the project, Salesforce did finally introduce Einstein to the world at its Dreamforce conference in San Francisco last night. However, it still isn’t clear whether the company would be making the device available to the general public.

So, what does Einstein do? In a post on the company website, Salesforce says one can get briefings, make updates and open dashboards with the voice assistant. “You have data, lots of data. Einstein learns from all that data to deliver predictions and recommendations based on your unique business processes. Pair that with automation and you have the insights and time to truly connect with your customers,” says the post while offering a quick video to prospects.

Having gotten over the euphoria of having Einstein suggest customized solutions, the moot question is how does Salesforce plan to really set the AI into operations?

A report published in TechCrunch.com said Salesforce Chief Product Officer Brett Taylor explained the theory behind the project whereby Salesforce data can be accessed via voice that would enable salespersons enter data into the app on the movie and ask the system to generate reports. He goes on to say that the idea of having AI guide business decisions is exciting as is the voice assistant.

Salesforce claims that a key advantage that it has over other platforms is the versatility whereby the offering is siloed, restricts data pulls to individual user accounts and at the same time can be taught to recognize jargon, acronyms and slang that is used within an organization. The company has taken pains to explain that Einstein isn’t a glorified transcriber.

Users can update Salesforce records, create tasks using natural language processing and navigate through the analytics dashboards while seeking to surface metrics such as open service cases and performance guidance, says a report published on Venturebeat.com.

“Plus, thanks to native integration with popular voice assistants like Google Assistant and Alexa, Einstein Voice Assistant can deliver a daily brief of “key priorities” like upcoming calendar appointments and teams pipeline updates,” says the report.

Brett Taylor says he views Einstein as part of a progression of technology which started with computers having a keyboard and terminal via Xerox, a mouse and graphics interface through Parc and touchscreen via Steve Jobs’ efforts with the iPhone and voice is just the next step for operating gadgets of all kinds and making it easier to get data processing devices to spew out information.

The company also came up with the Einstein Voice Skills (previously known as the voice builder) toolkit that helps create voice-powered corporate apps. From a set-up page, developers can select topics such as updating a field, creating a task or even reading out a prediction. Both the Voice Assistant and the builder are now available on a wide range of devices including the revamped Salesforce Mobile App for Android and iOS devices and on third-party speakers besides the Einstein Smart Speaker that demoed last night.

However, the one question which could be worrisome in the light of recent reports of security threats from voice assistants.  Reports of how voice assistants can get hacked by laser rays should come as a concern though the researchers who made this break-through revelation have suggested that the chances of it happening now are remote.

So, while voice assistants have become passé for homes, could it become so for the corporate world, especially when there’s so much more at stake in terms of data privacy within organizations.