The Chinese hardware giant seems to be utterly enamoured by Apple which is why after making smartphones that looked like the iPhone, their first wearable looks like an Apple Watch 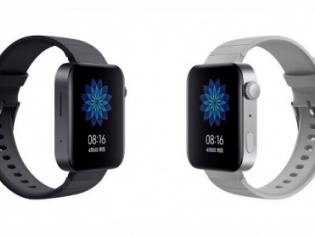 Chinese electronics major Xiaomi came out with its first wearable device – the Mi Watch and true to form the wearable looked exactly like the Apple Watch. If looks were all that mattered while choosing a gadget, the Mi would win hands down over other android watches and could even give Apple Watch a run for its money.

What’s more, the latest addition to wearables has borrowed liberally from the latest Apple Watch - the Series 5 – in terms of design and styling. Talk about being contemporary in approach! Like its illustrious competitor, the Mi Watch comes in a square shape with a crown and a button. It sporst a 1.78-inch AMOLED display with always-on features.

It runs the MIUI for the Watch, which however is proprietary to Xiaomi and is loosely based on Google’s Wear OS. The watch is housed in an aluminium alloy housing with a matte finish and boasts of microphones on two sides for recording audio and taking calls with a loudspeaker thrown in to the left for listening to music or incoming calls.

Unlike the Apple Watch, the Mi Watch comes in a single size (44mm) with a ceramic back that contains the charging pins and a heart-rate sensor. Powered by the Qualcomm Snapdragon Wear 3100 4G chipset, the watch boasts of 1GB of RAM and 8GB of storage which is where it gets the better of the original in some ways.

The company announced that the Mi Watch supports cellular connectivity via an eSIM besides Wi-Fi, GPS and Bluetooth. A press statement from the company says that the watch would last up to 36 hours on a single charge but on cellular mode.

The company has also come up with a series of frills like helping users track sleep, checking up on their athletic performances while swimming, running or cycling and measuring the heart rate thereof. It also comes pre-loaded with some Chinese apps led by TikTok and QQ Messenger.

Priced at around USD 185, it is going on sale in China from next week though the press release doesn’t make any reference to when it would be available in other markets. However, it is quite obvious, given the company’s past record, that the Mi Watch would reach Indian shores quite quickly though they might just be ruing the fact that the launch missed the festival season here.

Having focused on a range of cheap fitness trackers in the past, this is Xiaomi’s first venture into the lucrative watch segment. And by the looks of it, Xiaomi has a winner on its hands, especially in the Asian markets and specifically in India where often times only looks matter.