Google Launches Pixel 4 and Much More The “Made by Google” event, the last of the big launches prior to the holiday season, was held at New York on Tuesday evening. And true to form the company launched a slew of hardware products that ranged from its marquee Pixel 4 smartphone to a gaming console, ear buds, a new Chromebook and some more devices that tied into the Google Nest home connect experience.

Amidst the relentless rumors and leaks that culminated in a few pre-order scams, Google’s Pixel 4 appears to have matched the expectations of the industry with features such as facial recognition, multiple cameras, gesture recognition and better privacy, all of which bring the flagship product in sync with gadgets from competitors.

The Pixel 4 is priced at $799 and is scheduled to ship on October 24. The familiar Active Edge now launches an upgraded Google Assistant while the device now offers a recording app that is capable of transcribing conversations in real-time – something that the company has been focused on for quite some time now. A report published in TechCrunch.com suggests that from the demo, this feature appears impressive which is a thumbs-up to the AI software that the company has used. The app works in off-line mode which means users can record and transcribe at leisure without the Internet.

You can watch the video about Google Pixel 4 right here. The Pixel 4 sticks with solid hardware as was the case with its predecessors and comes with a standard and XL version that brings a 5.7-inch full HD+ screen (growing to 6.3 inch Quad HD+ in the larger version). The phones are equipped with a 3700 mAh battery and run the Snapdragon 855 chipset with 6 GB of RAM. The phones are equipped with radar chips that allow easier switching of songs, snooze alarms and smarter hand gestures.

On the camera front, the Pixel 4 has a multi-camera set-up at the back, thus following the square array example set by Apple’s latest iPhone 11. However, Google seems to have nestled the cameras much better than the big eye experience that the iPhone 11 gave us. There is a wide angle and a telephone lens at the back with 14 and 16 megapixels. The cameras use a combo of optical and digital zoom for some good close-up shots and is quite impressive with the Night Sight offerings

TechCrunch reports that the dual exposure controls brightness and shadow while AI training is used to adjust the white balance effectively. This feature uses data from Night Sight to get better shots using long exposure times. There is also machine learning to calculate real-time depth that enables broader depth of field with subjects and variable distances.

Now for the other bits of hardware that made this launch… Google broke the pattern with its Chrome OS laptops by launching the Pixelbook Go this time round at the higher end of the spectrum. The laptop comes with a 13.3-inch display and up to 16 GB of RAM with a standard 256 GB of storage. The company has promised battery life of up to 12 hours though in terms of weight, it goes beyond the MacBook, weighing close to 3.2 kgs. The base model is slated to cost $649 in the United States. 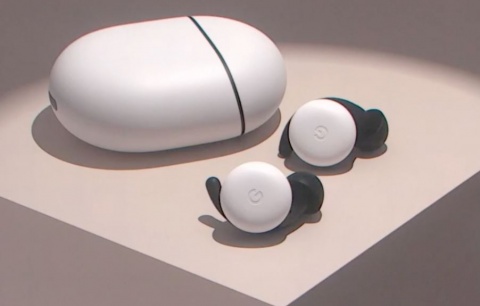 Google hasn’t allowed a failure in its first attempt to seek an answer to the popular AirPods. This time round, the company has announced a new series of Pixel Buds costing $179 that has battery power for about five hours per charge and comes with the floss-style charging case that can pack in an additional 24 hours of battery time. There is noise cancellation that allows the focus to remain on a phone conversation while canceling out ambient sounds like the wind. Google has set the ball rolling towards making Pixel Buds the Android version of the AirPods when it hits the market in six months’ time – the Spring of 2020. This one was right out of the hat. The Stadia is Google’s on-demand cloud game streaming device and is scheduled to launch on November 19. The company claims that the new console would change the way users play video games whereby instead of rendering the games on a console or a local PC, Stadia would do so on the cloud and push it across via Chromecast on to a smartphone or a browser, pretty much in real-time. The company has already announced some games it plans to support at a starting price of $10 dollars a month. The full list can be found here.

The Nest Aware and More

For starters the Nest Aware lets users add cloud recording to the Nest cameras and the biggest change is that while earlier it used to cost a few dollars per device, now the company is charging a flat fee regardless of how many cameras are in use. You pay $6 a month and get 30 days of history while double the cost and it’s 60 days of event history or 10 days of 24/7 video history. It would also allow users to put their Nest Minis or Nest Hubs into a security listening mode with speakers keeping their ears open for smoke alarms or other sounds that then gets notified in real-time.

True to rumors, Google has managed to combine the Google WIFI mesh routers with its Home Speakers that provides a hybrid device for home use. The new combo will start shipping early next month while the Nest Mini will ship from early next week. The Mini now has wall mountable features and comes without a speaker that offers double the bass. There’s also a machine learning chip that provides faster responses.