Home » News » The iPadOS Closes the Gap Between Tabs and Laptops

The iPadOS Closes the Gap Between Tabs and Laptops | TechTree.com

The iPadOS Closes the Gap Between Tabs and Laptops 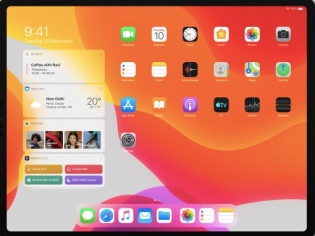 Once upon a time when Steve Jobs perceived tablets as the panacea for personal computing, the world laughed. For, they couldn’t believe that an overgrown iPhone could perform even half the tasks that users expect from a laptop, let alone replace the user experience of working on a piece of hardware that combines work with pleasure at all times – in case one gets uninterrupted Internet.

During the early years, Apple too appeared confused about where the tablet featured in a list of must-have gadgets for the new millennial, or even the not so new ones. As a result, software developers were left designing stuff only for that extra screen space that the iPad offered. It took them a few years, to be precise till the iOS 9 release, to figure out that tablets aren’t laptops or smartphones. Eureka! The split screen view and the slide over made their appearance. And then Apple didn’t stop!

While downloading Apple’s latest software release, one was a tad concerned given that Apple has often kept their primary focus on the phone and the laptop. However, this time I was pleasantly surprised and though there’s still much to be done, what we have is definitely a better UX and flexibility when it comes to using the iPad in general.

It offered me the ability to write copy, edit the same and even save files on to the gadget. It also allowed me to edit my photos and even watermark them, quite an improvement from the past. Use of the pencil feels much more natural now and multitasking (working on multiple screens) seems to be easier and more intuitive now.

Of course, when speaking about Apple, one would always expect some visual improvements. What stands out here is that the developers seem to have cracked the code when it comes to the overall browsing experience. It is now truly of desktop standards, especially when using the Safari. Some testing remains to be done on Google Chrome.

One of the features that made immediate sense for users who want to edit text has been incorporated in the latest version. Now, one can easily drag the text cursor around a screen and drop it where one needs it to be. Of course, things could be better, but what the heck? They’ve made a beginning and it sure cuts down on our effort as selecting text also got easier though it may take some getting used to.

The iPadOS now uses some new gestures for copying, viz., pinching three fingers together on the screen and pasting it. Of course, there’s the long-press option that could be used but one feels that the developers at Apple are getting their perspective right, given that the company wants the iPad to be as friendly as the traditional laptop. Oh! There’s also the Pencil that eases things even more.

And in case some of us are compulsive mouse users, the new OS allows for that too. Go into the accessibility settings and enable Assistive Touch to plug in the mouse or simply use the Bluetooth if it is enabled. Users could also define what how the mouse buttons should respond. The process isn’t exactly intuitive but then it is a start in the right direction.

This is where the latest OS makes the iPad look and feel different, more so if one hopes to use the hardware for more than just watching movies or playing games. What Apple has done is to make multi-tasking more refined and travel some more on the path to differentiating the iPhone software from that of its tablet.

What began with the Slide Over and Split View seems to be on the right track as many of the apps are now behaving in ways different from how they work on the smartphone. For e.g. now the Split View allows users to users to break parts of a few apps into a second window, especially useful to those who find it irksome to toggle between windows on a hand-held device.

There’s more to the latest release, but we would have to come back to it at some later day. Till such time, we advise you to go ahead, download the new OS and play around with it. Looks like Tim Cook plans to get more of us off the laptop and on to the iPad in the months ahead.