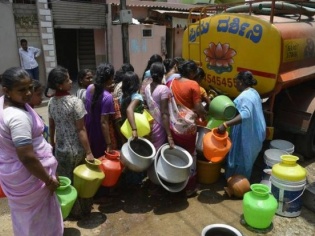 Father of the Nation Mahatma Gandhi once famously said that we need to be the change that we seek from others. Be it the traffic chaos or the water scarcity faced by urban pockets across India, the fact remains that each one of us is responsible for the chaos though we often pass the buck by blaming the administration for all our problems.

The only way to avoid traffic is to beat it by leaving early or late, as the case may warrant. Similarly, the looming water crisis could be avoided if each one of us becomes a tad cautious about its usage or more importantly its wastage. And if the Bengaluru authorities could have their way, there would soon be technology available to check water quality and how much of it we individually waste.

Well, this smart technology would soon be available in the hands of residents of the city, which not so long back had prided itself on being the Silicon Valley of the South. Of course, while the Californian original hasn’t reported any water crisis (though traffic chaos is catching up), Bengaluru is now waking up to the water shortage that could well see future tech investments move away.

The city, which boasted of over 700 lakes at the turn of the last century had 262 of them in the 1960s though now only 14 are left. Its population has grown since the 1990s and estimates suggest that it would double from now to 2031. Even the most efficient of administrations would find it tough to match this pace of growth, which is why the strain on infrastructure is so telling in Bengaluru.

Currently, half of the city isn’t even getting the per capita requirement of 135 liters with potability standards slipping each year. Since adding to the already scarce resource is going to be tough, the authorities are attempting an innovative means by providing water data for the city at each resident’s fingertips, thanks to a recent agreement between the BWSSB (local authority) and Water solutions Lab, an organization pioneering water solutions.

Residents of the city would now be able to monitor groundwater quality; the amount of water being wasted and other parameters that would encourage them to curtail their use and turn philanthropists of this scarce resource. The project would also help develop a real-time water security index at the ward-level across the city that would indicate usage efficiency, scarcity with a special focus on ground water, supply internalization and water solution stress index and governance.

Tushar Girinath, Chairman, BWSSB says given that population estimations for the city had failed due to the largescale migration resulting in planning failure for water and sewage network over the next five-to-ten years, the water scarcity index would be the one way that residents could be updated about the real problem that would hit them.

While the authorities have a fair idea of Cauvery water usage, it is with the ground water that they are facing trouble. In fact, unbridled use of ground water is resulting in several other problems such as soil quality degradation and with house owners and builders not adhering to rainwater harvesting norms, the situation would only get tougher.

However, once the water index comes to the fore, there is a possibly that the authorities can plan for the future through a combination of regulatory measures, audit and even punitive action against those who are compulsive wasters of water.

And if the project brings satisfactory results for the city, it could be good news for other Indian cities that are also facing similar challenges.