Home » News » The insanity of Apple pricing in India.

The insanity of Apple pricing in India.

The latest Apple launches always cost an arm and a leg… and often a kidney as well. But jokes apart, are such astronomical prices justified, especially in India? Now that the drumbeats have fallen silent, it is a good time to sit back and take stock of what exactly Apple launched for India in the recently concluded event in Cupertino. The biggest news for the gadget geeks was the launch of the iPhone 11, in all its multiple variants. While the press and even the TV anchors were going breathless with the launch and how iPhone 11 was better, bigger and more beautiful than its predecessors (they always are), I took a quick look at the price list.

Firstly, I am sure there are a few people out there who will buy a cell phone at Rs 1.41 lakh and I am not one of them. I am probably not even one of the guys who will shell out Rs 65K for a cell phone. That is not the point.

The real point is why is Apple pricing itself so highly that it is demanding a premium unheard-of in global marketing paradigms. 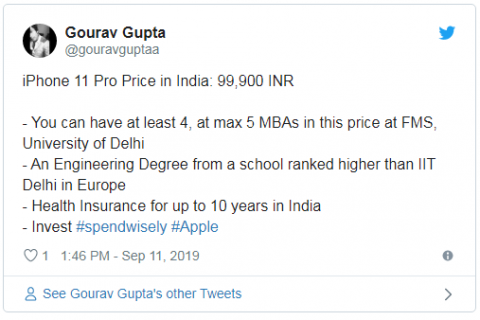 Just to set the record straight: the Pro Max is priced at  $1449 and the 64 GB version is $699. If you were to convert it directly, the respective prices would be Rs 1,01,430 and  Rs 48,930. Essentially, it means that there has been an additional markup of roughly 35-40%, which may account for import duties and markups IF the shipment comes from the US.

But it doesn’t. Most of the iPhones that we get in India are made in China or Taiwan or somewhere else in Asia. Consequently, linking the pricing of the iPhone to the US dollar itself is fundamentally wrong. Most companies look first at the cost of production, taxes and duties, and then the brand premium.

And so does Apple, at least in the US and other economies such as Japan, Europe et al. So is India a special case?

And once you compare the price with the Purchasing Power Parity (PPP), the pricing becomes even more absurd. For the uninitiated, Purchasing Power Parities (PPPs) are the rates of currency conversion that try to equalise the purchasing power of different currencies by eliminating the differences in price levels between countries (Source: OECD data). Roughly translated, it means that PPP refers to the same basket of goods that can be purchased in different economies in the world, indexed to the US dollar.

According to OECD, the PPP rate of the Rupee to a Dollar was 18.128. This means that what you can buy for a Dollar in the US will cost you around Rs 18 in India plus local taxes and levies. As per this calculation, the Pro Max ought to be priced at Rs 26,267 and the 64 GB version at Rs 12.671. Now that may be a tad too low for Apple, so one can double the figure to factor in brand premium and import duties. Hell, you can even add the import duties (20%) and then double it and you will still be below Rs 1.41 lakh for the Pro Max (512GB) (though some purists would question a 100% brand premium). The reason for this insane pricing is obvious. Despite such pricing, Apple still commands a double-digit market share in India and given the size of the market, it is in no hurry to rationalise prices to more reasonable levels.

Clearly, Apple’s strategy appears to be to sell its older models in India to sustain its market share. While the rationale for this may be clear to the Apple leadership team, the brand does run the risk of losing its equity in the mind of the larger public which could afford Apple, if it adopted a more reasonable pricing process. With the competition matching Apple’s features to a tee, sustenance of premia works only when the brand persona is seen in a positive light and not as a predator.

Oh, and by the way, before you go looking for sour grapes, I am a 25-year Apple user – Mac, iPhone, iPad and even the Pencil.