The phone is powered by octa-core Kirin 980 chipset and sports a 6.39-inch OLED screen.

The Honor Magic 2 was introduced in China last year which was one of the first smartphones to boast a manual slider mechanism. Now the company has announced a new 3D-edition of the Honor Magic 2. It gets a 3D ToF (Time of Flight) like sensor, which joins the previous triple selfie cameras to bring an added layer of security for Face unlock and digital payment authentication. The sensor scans for up to 10,000 facial points and could be trusted with the dark environment. The Honor Magic 2 3D is priced at 5799 CNY (Rs. 60,000 approx.) in China. 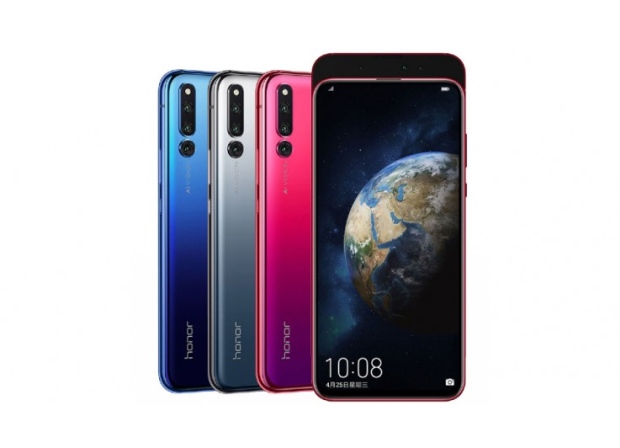 The rest of the specifications and the build of the device stays similar. It boasts a premium 3D glass back with some interesting reflective hues. Despite the triple cameras at the rear it maintains a clean look as it comes with an in-display fingerprint sensor at the front. Owing to the slide out rear which carries the selfie snappers, the front sports a non-intrusive 6.39-inche AMOLED Full HD+ display which covers 108% DCI-P3 Colour Gamut. It is powered by the world’s first 7nm Huawei’s home-grown octa-core Kirin 980 SoC (System on Chip) to power an Android device. It comes in a 6GB RAM/ 128 GB storage and 8 GB RAM coupled with either 128 GB/256 GB storage variants to choose from.
On the photography front, it is equipped with a triple rear camera setup comprising of a 16-megapixel primary sensor, 24-megapixel monochrome and a 16-megapixel ultra-wide angle lens. Selfie aficionados would be extremely delighted as this one boasts of a triple selfie snappers consisting of a 16-megapixel primary and two 2-megapixel depth sensors.
Other features include Dual 4G VoLTE, IPX2 water resistance, AI (Artificial Intelligence) backed camera stabilisation, Dual band Wi-Fi, Type-C USB, NFC, Bluetooth 5.0 etc. The device runs on EMUI 9.0 on top of Android 9.0 Pie. It draws power from the 3,500 mAh battery under its hood which comes with a 40w fast charger which claims up to 50% charge in just 15 minutes and up to 85% in just 30 minutes.