One of the few tablets to feature an OLED screen.

Samsung has announced its latest Galaxy Tab S5e just ahead of its ‘Unpacked’ event scheduled on February 20. The Galaxy Tab S5e features a metal body, weighs just 400 grams and is quite thin measuring 5.5 mm. It sports a massive 10.5–inch Super AMOLED display with 16:10 aspect ratio and 2560 x 1600 pixels resolution. The power button is placed on the right and also acts as a fingerprint sensor. It is powered by an octa-core Snapdragon 670 SoC (System on Chip) and comes in 4GB RAM / 64 GB storage and 6 GB RAM / 128 GB storage variants. The memory is expandable up to 512 GB via the microSD card slot. 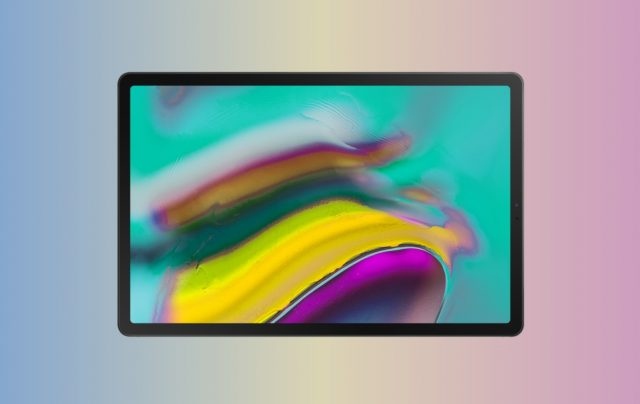 The Samsung Galaxy Tab S5e comes equipped with AKG tuned quad-speaker setup with Dolby Atmos for an immersive audio video experience. It gets a POGO connector to attach accessories such as a charging station and a keyboard. On the photography front, it comes with a single 13-megapixel rear camera with LED flash and a 5-megapixel front shooter. The tablet runs on Samsung’s new One UI based on Android 9.0 Pie and gets a New Bixby 2 assistant feature. The Samsung Galaxy Tab S5e comes in Wi-Fi and an 4G LTE variants. It is powered by a 7,040 mAh battery under its hood which comes with Fast charging and promises of up to 14.5 hours of continuous video playback.
The Samsung Galaxy Tab S5e will be available in select countries in Q2 of 2019. It will come in Black, Silver and Gold hues. Prices for the Wi-Fi only version start at $399.99 (Rs. 30,000 approx.) while the LTE version starts at $ 541 (Rs. 40,000 approx.).