The budget smartphones come with a starting price of Rs 6,699.

Tecno, a smartphone brand of Transsion Holdings of China has launched two budget handsets in India. The Tecno Camon iAce 2 and iAce 2X are priced at Rs 6,699 and Rs 7,599 respectively and will be available in retail stores across the country. The handsets will be available in Midnight Black and Champagne Gold colours as standard. Apart from these the Camon iAce 2 will come in a special City Blue shade while the Camon iAce 2X will come in a Nebula Black/Blue gradient finish back. For winning the trust of the customers, Tecno is backing the devices with a 1-time screen replacement. 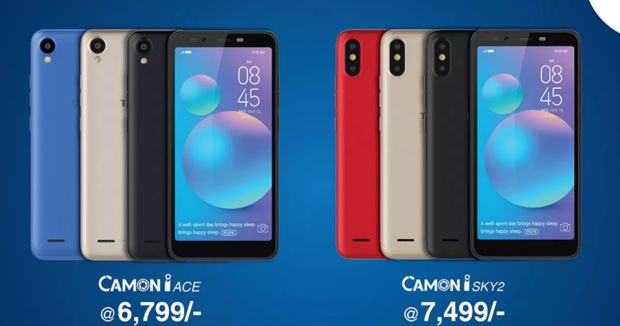 The Tecno Camon iAce 2 & iAce 2X share similar design characteristics and a polycarbonate build. The iAce 2X gets a premium looking gradient finish at the rear along with a fingerprint sensor which the former lacks. At the front you don’t get any display notch but they sport a fullscreen 5.5-inch HD+ 2.5D curved display with 18:9 aspect ratio. Both are powered with a 2 GHz quadcore MediaTek Helio A22 SoC (System on Chip) which is built on the 12nm process. The iAce 2 comes equipped with 2 GB RAM whereas the iAce 2X gets 3 GB of RAM. Both get 32 GB of inbuilt memory with expandable storage of up to 256 GB via the dedicated microSD card slot.
On the photography front, the handsets come with vertically stacked dual camera setup at the rear consisting of a 13-megapixel primary sensor with f/1.8 aperture and a secondary VGA depth sensor. The front bezel carries the 8-megapixel f/2.0 selfie snapper which comes with LED flash. Both the devices also get Face Unlock feature.
The smartphones come with Dual-SIM and Dual 4G VoLTE capabilities. Other features include Bluetooth v4.2, FM radio, 3.5mm audio jack, Wi-Fi, GPS+GLONASS and dual microphones on-board. The handsets run on HIOS 4.1 on top of Android Oreo 8.1 and are powered by a 3050 mAh battery under its hood.