It is claimed to be a smarter way to save space, find and share files on your phone.

Google today announced the launch of Files Go app that takes a mobile-first approach to freeing up space, finding files faster and easily sharing them with others, even when offline. Starting today, Files Go will be globally available on the Google Play Store for all phones running Android 5.0 (Lollipop) and higher.

Talking about the new app, Caesar Sengupta, Vice President, Next Billion Users, Google, in a blogpost said, “Every day, millions of smartphones run out of space. While phones with 16GB or 32GB of storage are becoming more popular, many phones around the world have much less storage, often as low as 4GB.” 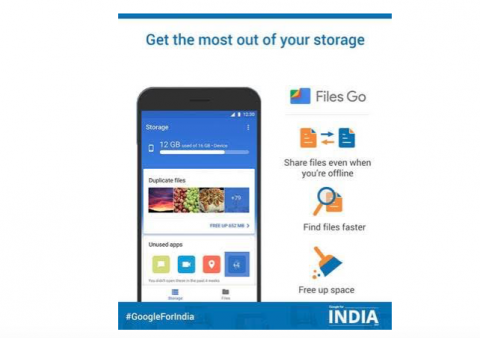 He also mentioned, “Users often struggle to keep on top of the storage space on their phones and are constantly having to choose between what to keep or delete. We’ve been testing Files Go for a month, and the average user is saving 1GB of space and has shared many files with others without using data.”

Adding further on the application’s capabilities, it is worth noting that users get personalised suggestions about which files to delete, whether it’s unused apps, large files, duplicate files or low-resolution videos and memes detected using Google’s latest mobile vision technology. The app also allows you to find exactly the stuff you want with smart filters that automatically organize your images, videos, apps, documents, and more.