The device is expected to come with a price tag of around Rs 40,000.

It looks like Chinese smartphone company OnePlus is all set to launch its much awaited OnePlus 5T on Nov 16 at Brooklyn, New York, and will accordingly be available in India from Nov 21.

Interestingly, the company has announced that the live stream of the launch event which is happening on Nov 16 from 9.30 PM is being screened specially at PVR theatres across New Delhi, Mumbai, Bangalore, Hyderabad, and Pune. The ticket for the special screening can be purchase from Bookmyshow for Rs 99 starting from Nov 8 from 10 AM.

Speaking about the launch of this new device, the company CEO Pete Lau has given out a hint recently that the device may accompany a price tag of around Rs 40,000 in India. 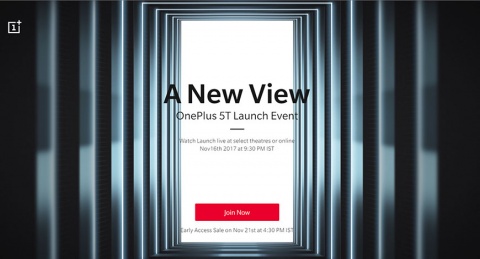 Technically speaking, the OnePlus 5T comes with a 6 inch FHD+ bezel less display with 18:9 aspect ratio along with a fingerprint sensor on the rear panel as the device lacks a physical home button; pretty much like the iPhone X.

The device is said to feature a Qualcomm Snapdragon 835 octa core processor while running on Android 8.0 Oreo with Oxygen OS on top of it. It is also expected to launch in two RAM and Storage variants pretty much like the OnePlus 5.