WhatsApp has today unveiled its own emoji set for the first time | TechTree.com

Appearing in today's beta release of WhatsApp for Android, this new emoji set appears to be highly inspired by Apple's designs. 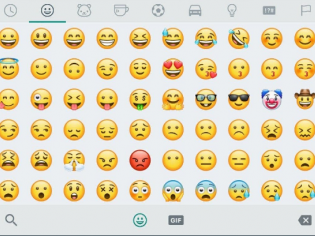 After a long history of using Apple's emojis on all platforms including Android and the web, WhatsApp looks to be taking the direction of Facebook and Twitter in using their own custom emoji set within the app.
At a glance these could be confused for Apple's own emojis. It appears that the brief for this project may have been "take Apple's emojis, and change them enough so we can call them our own". Is that a bad thing? Perhaps not, given how change-averse most users can be.
Side-by-side the differences are clear for some emojis, but others are very close to what Apple displays. Given that WhatsApp users are already accustomed to Apple emoji images it's safe to say these shouldn't be too much of a shock.
There is precedent for WhatsApp designing its own emojis. WhatsApp was first to implement the middle finger emoji when no vendor had Unicode 7 support, and briefly added an emoji for the Olympic Rings.
In fact, it's been clear for quite a while that WhatsApp could implement their own emoji set on Android if they wanted to, as the Apple images they use there had no native implementation. It was all custom already, and only the images needed changing.
With this beta release, WhatsApp is ahead of iOS native emoji support. Emoji support is included up to Emoji 5.0 which is the latest version approved by Unicode. In the past, WhatsApp would tend to include Apple's new emojis a few months after they hit iOS.
It's worth noting that this is only a beta, and these emojis might change before public release, or not even make a public release.
WhatsApp did not respond to a request for comment about this release at the time of writing.
Browse all WhatsApp emojis
WhatsApp Olympic Rings Emoji