The dual rear camera module is similar to that of the iPhone 7 Plus.

Xiaomi has finally launched its dual camera smartphone in India, and it looks like, the rumours turned out true. The phone is dubbed as Xiaomi Mi A1, and is the company’s first Android One smartphone, available at a price tag of Rs 14,999.

This also means that, this is the company’s first Android smartphone to come with stock Android operating system. Interestingly, the Mi A1 is also Xiaomi’s first phone in India to feature a dual-lens camera, each 12 MP capacity and 2X Optical Zoom. One is a Telephoto lens, and another is a wide angle lens, and to recall, this is pretty much similar to the dual lens module found on iPhone 7 Plus.

Technically speaking, the device comes with a Qualcomm Snapdragon 625 processor, 5.5 inch FHD display with Corning Gorilla Glass protection, 4 GB RAM, and 64 GB ROM. The front camera is made up of a 5 MP sensor. 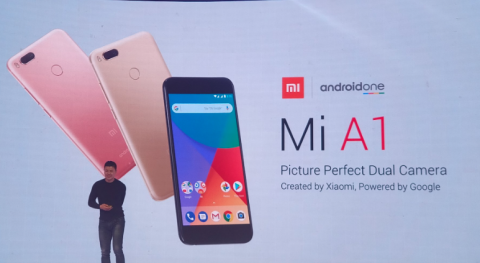 The smartphone is backed by a 3,080 mAh battery and supports 4G VoLTE and USB Type C connection. It also features Android 7.1 Nougat operating system out of the box, and since it has been released as part of Google’s Android One initiatives, the chances of getting Android Oreo is hundred per cent. To be clear, the company has announced that Xiaomi Mi A1 would be getting Android Oreo update by the end of this year.

Another interesting feature about the smartphone is its IR Blaster which allows you to operate your TV and many other home appliances from the phone itself. And, since it is a dual camera smartphone, Portrait Mode is also supported.  The smartphone will be sold on Mi.com and on Flipkart starting from Sept 12, and will also be available in offline stores as well, in two color options — Black and Gold.