The smartphone is expected to be called Gionee M7 considering a previously leaked out GFXBench report.

Chinese smartphone manufacturer Gionee has recently teased its upcoming smartphone with two eminent features — one being a bezel-less display and another, dual camera setup.

GSMArena recently spotted the teaser posted on Weibo, and the teaser clearly gives us a hint of a bezel-less display and dual camera feature.

By looking at the teaser image, we can see two bike wheels which looks pretty much like a dual-camera setup. And, so, GSMArena claims that the Chinese smartphone company may collaborate with Ofo, a bike-sharing startup from Beijing, for the launch of the new smartphone. 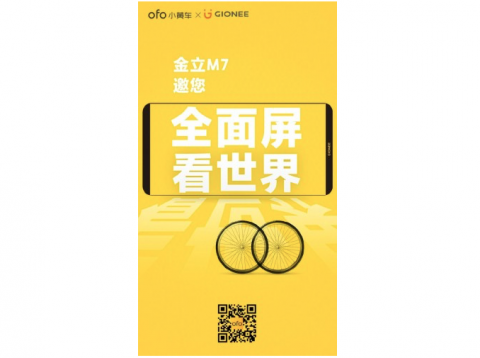 The report also suggests that the smartphone may be called Gionee M7 considering a previously leaked out GFXBench report. Well, if that turns out true, then the smartphone would be featuring a 6 inch screen and MediaTek MT6757CD chipset, along with 4 GB RAM and 64 GB ROM.

However, we may have to wait until the company makes an official announcement of the smartphone’s launch date and its technical features. Watch this space for more updates.