Opera Updates Its Family Of Browsers

Showcases several new features at its Up North Web 2011 event. 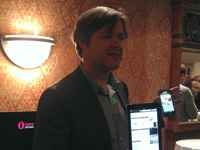 Opera demoed its Opera Mini 6.5, Opera Mobile 11.5, and Opera 12 Alpha (desktop) at the Up North Web 2011 event in its hometown of Oslo. The list of new features showed off included hardware acceleration, camera compatibility, WebGL, and a data usage monitor. The Android versions of Opera Mini and Mobile now show you exactly how much time and data you have saved using these products. This is useful for people on capped data plans to keep track of their usage and data limit. As reported earlier, the server-side rendering technique compresses webpages by up to 90%, resulting in a faster and cheaper web experience.

During the event, the company also showcased some of the new features of the upcoming Opera 12 (PC version). The main highlight was of course WebGL, a stripped-down version of OpenGL for devices with relatively low specs. Although Opera is betting big on this new technology, IE9 doesn't support it. This situation isn't encouraging for developers, but Opera's Chief Technology Officer, Haakon Wium Lie claims that "I don't think they [Microsoft] have an interest in not doing WebGL". Let's hope MS embraces it as a new web standard so that we will get some good-looking, browser-based 3D games.

The Norwegian company also revealed its plans to make a mark in the TV space. It is teaming up with LCD manufacturers to get Opera into living rooms - in other words, incorporate the browsers and other web apps in the next generation of smart TVs. For older and current devices, Opera plans to implement this through set-top boxes.

Opera Mini and Opera Mobile for Android are available for free in the Android Market, or from m.opera.com. Those interested in trying out Opera 12 Alpha can click this link.