Samsung is all set to launch its upcoming smartphone, the Galaxy Note 8, today at 8.30 PM IST. However, it seems like the company will also unveil its Gear Fit 2 fitness tracker alongside. Just like before every launch, we have a fresh leak that gives out some information about the fitness tracker.

Popular tipster Evan Blass (@evleaks) has recently tweeted a screenshot which shows the price tag of the new wearable as $199.99. 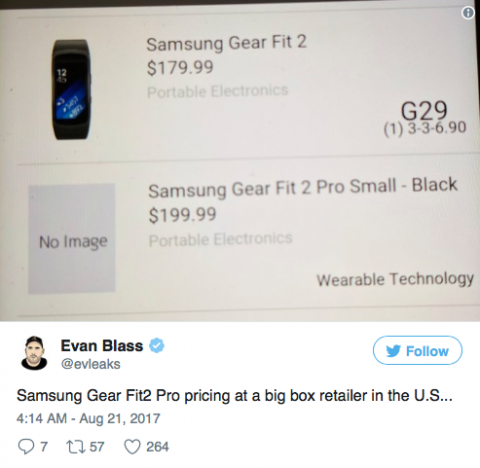 Having said this, while the actual launch date of Fit 2 Pro is not confirmed by the company, report published on GSMArena suggests that the device may be made official during the Aug 23 launch event. However, it is worth noting that, the company has been concentrating primarily on Galaxy Note 8’s launch for this event.

To actually witness the launch event, and to find out whether the company actually unveils Gear Fit 2 Pro in today's event, we recommend you to tune in to the live stream of Galaxy Unpacked 2017 here.