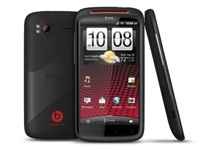 HTC has unveiled the new Sensation XE, which will feature Beats Audio technology by including Beats by Dr. Dre in-ear headphones. The XE promises improved performance and battery life compared to the original Sensation.

The phone boats of a 1.5 GHz dual-core CPU working in tandem with the Adreno 220 GPU. It sports an 8 MP snapper, 786 MB RAM, Wi-Fi, GPS, Bluetooth 3.0, MHL-enabled microUSB port, and a microSD card slot. The device runs on Android 2.3 (Gingerbread) with HTC's custom layer of Sense 3.5 UI.

Although a 1.5 GHz dual-core CPU might sound too much for a mobile phone, I won't complain as long as it doesn't hamper battery life. Then again, developers will provide justification for such absurdly powerful devices in the form of complex 3D games.

HTC Sensation XE is expected to be available across Asia Pacific by the end of this month. However, there is no word on pricing yet.